The saint who died rather than give up his rosary 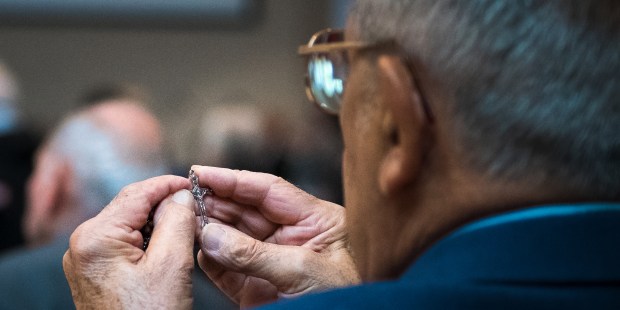 Blessed Ceferino Giménez Malla seemed like just another old man devoted to prayer … but he ended up a martyr.

Towards the end of his life, Blessed Ceferino Giménez Malla (1861-1936) probably looked like a thousand other old men praying the Rosary after daily Mass. But his path to holiness wasn’t typical, nor was his pursuit of virtue. When he was shot for praying that same Rosary, nobody who knew him was surprised that in the end he had given his life for God.

The very fact that Ceferino’s holiness was taken for granted is remarkable given his ethnicity; Malla was Romani (a people often pejoratively referred to as Gypsies) and grew up in a world that looked down on him for his origin and lifestyle. Rather than become embittered or abandon his people, Ceferino embraced the Roma way of life and acted as a bridge between Kalos (his particular tribe) and Spaniards.

Ceferino was raised in a poor, wandering family of basket-weavers who moved from village to village in Spain and southern France. Though he was baptized as an infant, accounts of Ceferino’s youth tell us little about his faith life. The fact that he prayed in Catalan indicates that he likely learned his prayers when living in Catalonia as a child, but his marriage outside the Church at 18 could indicate that his religious formation wasn’t terribly strong.

He may not have known his faith, but Ceferino strove nevertheless for goodness. After he and his wife Teresa were married in a traditional Roma ceremony, Ceferino became a horse trader, a profession known for its dishonesty. But Ceferino, though he was talented and successful, refused to deceive. His natural virtue made him a good businessman, despite the fact that he had no formal schooling and was entirely illiterate, and his generosity and willingness to risk himself for others made him many friends. Once the former mayor of Barbastro, the city in which Ceferino and his wife eventually settled, began coughing up blood in the public square. Fearful of tuberculosis, those around him fled, but Ceferino, known as El Pelé (“the strong one” or “the brave one”), helped the man home. His grateful family gave El Pelé a large sum of money, which he used to make quite a fortune as a horse trader.

As the years went by, Ceferino went from good to holy. Thirty-two years after his tribal marriage to Teresa, the couple finally celebrated the sacrament of Marriage in the Church. Soon El Pelé was a daily Communicant, praying the Rosary daily and acting as a peacemaker between Kalos and Spaniards. Though he and his wife were unable to have children, they adopted Teresa’s niece Pepita and Ceferino was a marvelous father and later a grandfather who delighted in his grandchildren.

Ceferino was once accused of selling stolen horses but was able to present documents clearing his name. When he was acquitted, his lawyer proclaimed, “El Pelé is not a thief, he is Saint Ceferino, patron of Gypsies.” Ceferino walked on his knees to the cathedral to give thanks, but there were no jeers or rolled eyes; the people of Barbastro knew that El Pelé was something special.

In 1922 Ceferino’s wife died, but he didn’t allow his sorrow to push him from God. He became a Third Order Franciscan and a member of the Society of St. Vincent de Paul, so generous that despite his great fortune he became quite poor later in life, “ruined” by his refusal to allow others, particularly poor Roma, to go without. Though he was illiterate, he knew the faith well and became a catechist, telling stories of Jesus to captivated children before giving them a piece of chocolate and sending them on their way. He wore elegant clothes and loved dancing, village fairs, and Roma feasts. All in all, he was a kind and generous old man much like many kind and generous old men in every parish in the world.

But Ceferino was also a Catholic living in Spain during the Spanish Civil War at a time when anti-Catholic sentiment was enshrined in law. One day he saw a priest being arrested and called for the soldiers to stop. They turned on him, asking if he had a weapon. “Only this,” El Pelé answered, holding up his rosary. He was beaten for it and dragged to jail.

In prison, he prayed the Rosary faithfully, antagonizing his anti-Catholic captors. He was advised by an anarchist that if he stopped praying so obviously his life might be saved. His daughter visited, begging him to give up his rosary. But for El Pelé to do so, he felt, would be to deny his faith. And so the dignified grandfather was executed and thrown in a mass grave. Sixty years later, he became the first of the Romani ever to be beatified.

On May 4, his feast day, let’s ask his intercession for the strengthening of marriage, for adoptive parents, and for the Romani people.

Read more:
Although pregnant, imprisoned and severely abused, she refused to deny her faith