Cardinal Sarah dares the world to be silent 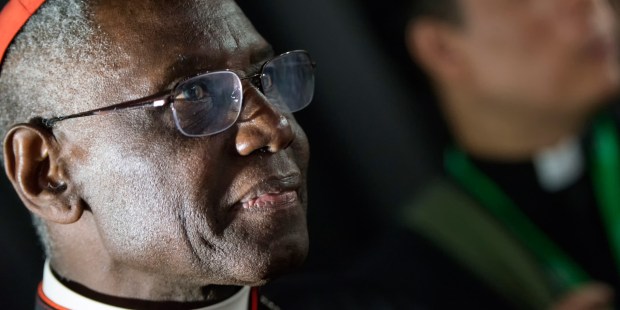 “If we do not cultivate this silence, how can we find God?”

Ours is a loud age … ours is a restless age.

We know the landscape well: the raucous media circus that blurs the line between power politics and viewing pleasure; the teeming internet jungle of tweets about jeremiads and jeremiads about tweets; and a digital presence that multiples itself exponentially, without end. We even internalize it, drawing it into ourselves in greater doses until we not only make noise, but are noise, plugged into the agitation and clamor of the world and unable to watch or click or share our way out of it.

But what else is there?

Into this milieu marches The Power of Silence: Against the Dictatorship of Noise, a powerful new book with a revolutionary message: that what our world wants least but needs most is stillness and silence.

Robert Cardinal Sarah of Guinea touched on the subject in his first interview with Nicolas Diat, God or Nothing, where he concluded that for many of us, the “disturbing” sound of silence just doesn’t feel like an option. “We ceaselessly need to hear the noise of the world: today logorrhea is a sort of imperative, and silence is considered a failure.” The Power of Silence, another interview with Diat, unpacks the philosophical and spiritual dimensions of silence, including our reticence to even begin engaging it.

The interview unfolds with a numbered series of philosophical fragments, much like the Pensées of the philosopher Blaise Pascal (whom Sarah quotes). “What will become of our world if it does not look for intervals of silence?” Sarah asks. “Interior rest and harmony can flow only from silence. Without it, life does not exist. The greatest mysteries of the world are born and unfold in silence.” In silence, where so many of us see an unsettling absence, Sarah challenges his readers to discover instead the presence of the greatest mystery there is, one which, like the gaze of a lover, the growth of a plant, or the motion of the stars, communicates itself in and through its own silence. “Nothing will make us discover God better than his silence inscribed in the center of our being,” Sarah writes. “If we do not cultivate this silence, how can we find God?”

The postmodern world cuts itself off from God precisely to the degree to which its cuts itself off from silence and solitude. “Without silence,” he writes, “God disappears into the noise.” But Sarah also makes it clear that cultivating silence is not just a matter of quieting speech and sounds; it also means quieting our judgments, passions, and thoughts. In fact, the path of exterior silence can painfully reveal the depths of interior noise into which we’ve been plunged – which is precisely why we tend to avoid it. “With its festive appearance, noise is a whirlwind that avoids facing itself,” he writes. “Agitation becomes a tranquilizer, a sedative, a morphine pump, a sort of reverie, an incoherent dream-world. But this noise is a dangerous, deceptive medicine, a diabolic lie that helps man avoid confronting himself in his interior emptiness. The awakening will necessary be brutal.”

Read more: Pope Francis and Cardinal Sarah invite us to silence. Does that scare you?

Sarah invokes various beautiful images – a temple, a melody, a light, and a flame – to capture the glory of silence, but also invokes more disquieting imagery to capture its power – a burnt offering, a shadow, a wave, a violent seizure. The necessary practice of silence means an encounter with God, and the encounter can take us to “fearsome shores.” But Sarah encourages us to venture on, discovering the same great peace and fortitude that so many holy men and women have found in their silence.

It would’ve been easy for Sarah to devolve into an indictment of political, economic, and social powers – and while Sarah is certainly not silent on their culpability, his focus is more on revealing and inviting us into the great sources of silence in the Catholic tradition. He returns to the Old Testament again and again, but finds the greatest scriptural odes to silence in the life of the Holy Family. Joseph never utters a single word in the Gospels; Mary’s words are few – the Gospels of Mark and Matthew have no mention of her words either – and her entire life is swallowed up in faithful obedience and prayerful attentiveness. But it’s in the life of her Son that silence takes on a whole new meaning. “The whole life of Jesus is wrapped in silence and mystery,” Sarah writes. “If man wants to imitate Christ, it is enough for him to observe his silences. The silence of the crib, the silence of Nazareth, the silence of the Cross, and the silence of the sealed tomb are one. The silences of Jesus are silences of poverty, humility, self-sacrifice, and abasement; it is the bottomless abyss of his kenosis, his self-emptying.”

For Sarah, who is also the Prefect of the Congregation for Divine Worship, the Church has to protect and foster this silence in its prayers, in its sacraments, and in its liturgy. The Cardinal made headlines last year when he called for a return to “ad orientem” celebration of Mass (in which the priest faces the same direction as the congregation), and in The Power of Silence, doesn’t hesitate to call once more for a “reform of the reform” of the liturgy, adding that “the future of the Church is at stake.” He makes a compelling case, and it’s clear that he’s driven not by any ideological commitment, but a burning love for the Church and sacred silence, “a small anticipation of eternity” that can uniquely open a heart to God.

After a probing discussion of God’s apparent silence in the face of evil – Diat hammers Sarah with various examples of the horror unfolding in various parts of the world – the book closes where it opened: at the Carthusian monastery of the Grande Chartreuse in France, memorialized in the documentary Into Great Silence. The Carthusians aren’t presented as a universal standard of silence, but as exemplars of its vital importance – and Sarah doesn’t necessarily call his readers to eliminate speech and action, but on the contrary, to give them greater depth and breadth by grounding them in that silence.

The Power of Silence is an eminently wise, rich, and timely piece of writing, one that meets the mind both like a quiet nighttime meditation and a rousing call to revolution. Sarah’s voice has the freshness and liveliness of a springtime of faith, and reflects the ongoing boom of Catholicism in Africa. It’s a voice that the West desperately needs to hear. It challenges us to return to the essentials of Christian life, where our lifeblood isn’t the artificiality, egotism, and endless chatter of the world, but the wordlessness, humility, and eternal silence of God.