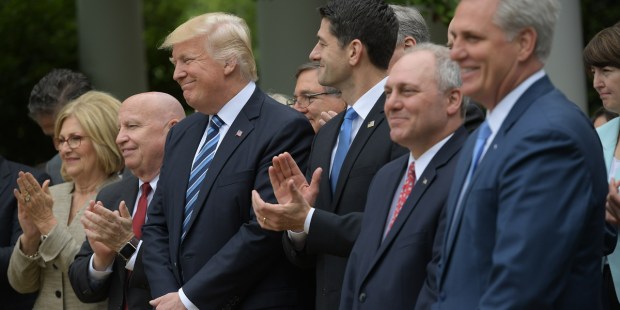 Mandel Ngan | AFP
US President Donald Trump and Speaker of the House Paul Ryan in the Rose Garden of the White House following the House of Representative vote on the health care bill on May 4, 2017 in Washington, DC
Following weeks of in-party feuding and mounting pressure from the White House, lawmakers voted 217 to 213 to pass a bill dismantling much of Barack Obama's Affordable Care Act and allowing US states to opt out of many of the law's key health benefit guarantees / AFP PHOTO / Mandel NGAN
Share
Print
John Burger - published on 05/09/17

As the U.S. Senate prepares to take up healthcare reform, many observers feel that the upper chamber will essentially scrap the bill passed in the House of Representatives and start from scratch.

But there are aspects of the American Health Care Act, and its spirit, that ought to be retained, one healthcare advocate said in an interview Monday.

“This is one of many steps in the right direction towards returning our healthcare system to one that is based on the patient-doctor relationship and the dignity of the human person,” said Louis A. Brown, director of the Catholic healthcare ministry CMF CURO. “It’s not the only step. It’s part of a larger vision for the American healthcare system that puts the patient at the center of the decision-making and not the government, which is what we had in the Affordable Care Act. It led to a significant number of Americans having a decrease in their healthcare options and a significant number of Americans seeing an increase in insurance costs.”

President Donald J. Trump, who vowed during his campaign last year to replace and repeal “Obamacare,” gathered Republican leaders and members of Congress in the White House Rose Garden for a victory celebration last Thursday after GOP lawmakers narrowly passed a bill that would eliminate key aspects of the ACA, including the so-called “individual mandate.”

But not everyone was celebrating.

“It is deeply disappointing to many Americans that, in modifying the American Health Care Act to again attempt a vote, proponents of the bill left in place its serious flaws, including unacceptable modifications to Medicaid that will endanger coverage and affordability for millions of people,” Bishop Frank Dewane of Venice, chairman of the U.S. bishops’ domestic justice and human development committee, stated April 27.

“I would really hope that additional work looking at Medicaid, considering the population, look years ahead and say … ‘How do we ensure that they have access to medical care?'” Brown said. “How to take care of that population, recognizing that that population are our brothers  and sisters that qualify for Medicaid, that they’re in need of our help … How to we ensure a social safety net that’s fiscally responsible but also recognizes their vital need for medical care?”

Rolling back Medicaid expansion will hurt people who obtained coverage under the ACA because of that expansion, said Falguni Sen, director of the Global Healthcare Innovation Management Center at Fordham University. Under the Affordable Care Act, those who earn up to 138 percent of the poverty level can enroll in Medicaid. States that opt for it have been given a lot of extra money to cover those people under Medicaid.

“And that is really one of the main ways in which uninsured have gotten insured–people who normally wouldn’t have qualified for Medicaid,” Sen said. “A lot of people who have sought medical care in emergency rooms have opted for it.”

Under the AHCA, states can continue this “expansion,” but the federal government will no longer pay for it.

Sen said there is a concern that if this Medicaid expansion is cut back, there will be a return to the days when there was a “huge influx of uninsured people coming into emergency rooms” for non-emergency care.

“I think the Senate will do something to try and protect” this segment of the population, Sen said. “I feel that the current rules for what would allow states to request an exclusion from the rules are going to be tightened. The same thing I believe will happen also for pre-existing conditions. Right now there’s a kind of way for states to apply to exclude themselves from requirements for pre-existing conditions, as long as they plan on creating some risk pools within their state, so that the premium burden on those who had pre-existing conditions will not be as high. They’ll still go up, but won’t be as high. I think those will be tightened as well.”

Another debate is about the question of how to insure people with pre-existing conditions.

“What you have is a group of people who essentially are uninsurable–someone who is already sick,” explained Michael D. Tanner, a senior fellow at the Cato Institute. “If you already have the condition, you’re not really getting insurance–you’re getting your healthcare paid for. The analogy often used is if you drive your car into a tree you can’t then pick up the phone and retroactively buy an auto policy to cover that accident. It’s too late at that point. Once you’re sick, you’re no longer being insured; it’s just a question of how you pay for the healthcare.”

The ACA tried to pay for those people by “shoe-horning them into the health insurance system and making everyone else who had insurance pay for them,” Tanner explained. “To bring down costs for people who are sick, people who are healthy would pay higher premiums and that would offset the cost of the sick people, and everybody comes out even. If you’re going to do that, you have to find a way to get healthy people to pay the higher premiums, which they don’t want to do. That’s why you had an individual mandate under the ACA, to force people who are healthy to buy insurance. Unfortunately it didn’t work. It turns out that people didn’t want to buy insurance when they’re healthy, even when there’s a mandate, and roughly half ended up paying the penalty and got no insurance under the ACA. Because healthy people didn’t buy insurance, the insurance companies were losing money, and that’s why they’re pulling out of the marketplace and raising premiums, and that’s why you have all the problems within the ACA–because young healthy people didn’t buy insurance.”

He said the Republicans still need to come up with a clear plan on how to deal with the problem. “They don’t want people with pre-existing conditions to go without healthcare, but they don’t want this pushed simply to keep them in the insurance market because then you have the same problems you had with the ACA, in fact worse, because the Republicans got rid of the mandate,” Tanner said.

That’s one thing people will be watching for as the Senate takes up the legislation.