What does the IHS monogram mean? 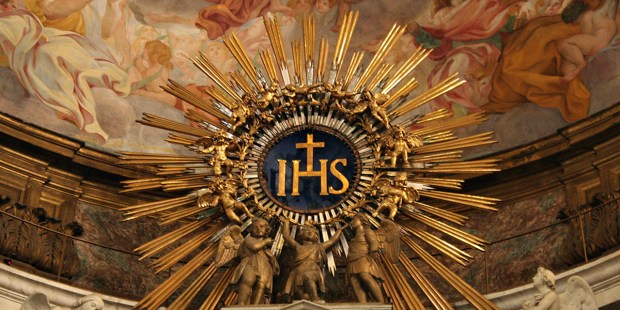 The ancient symbol permeates Christian art all over the world.

It is extremely common to walk into a Catholic church and see the letters IHS etched on a crucifix or prominently featured in a stained glass window. What do they mean?

Contrary to popular belief, the monogram does not stand for “I have suffered,” “Jesus Hominum Salvator” or even “In Hoc Signo.” IHS is more appropriately called a “Christogram,” and is an ancient way of writing the word “Jesus Christ.”

Dating all the way back to the third century, Christians shortened the name of Jesus by only writing the first three letters of his name in Greek, ΙΗΣ (from his full name ΙΗΣΟΥΣ). The Greek letter Σ (sigma), is written in the Latin alphabet as an “S,” resulting in the monogram being commonly represented as ΙΗS.

In the early centuries of the Church it was a secret symbol, often etched on tombs of Christians. Then in the 15th century, Saint Bernadine of Siena went on a preaching campaign to promote reverence to the Holy Name of Jesus and encouraged Christians to put IHS on the doorways of their homes. A century later in 1541 Saint Ignatius adopted the monogram to represent his newly founded order, the Society of Jesus. The symbol now permeates Christian art all over the world.

Read more:
What is the Apostolic Pardon?