What the marshmallow test teaches us about self-control 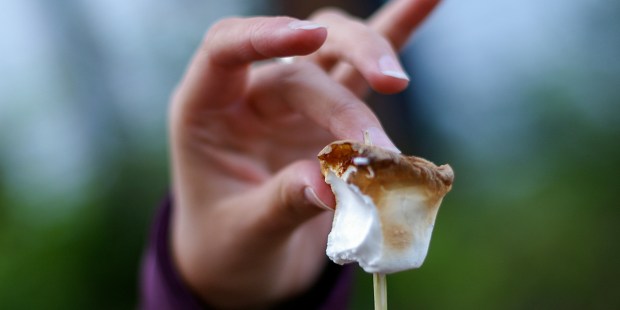 Self-control is not just a genetic trait. It can be learned and developed, using these tips.

Self-control, meaning the ability to control your behavior and reactions, is a great advantage and has a big impact on how we deal with life’s curveballs. Until recently it was thought that genetics determined the level of will power one possesses. American psychologist Walter Mischel believes otherwise — in his opinion, self-control can be learned.

This idea was tested at the Big Nursery School at Stanford University. Walter Mischel, a psychologist at the threshold of his career, decided to see how preschool children aged four to five cope with resisting a particular temptation.

Read more:
You can overcome temptation—but only if you want to!

Each child was led to a Surprise Room, where there was one marshmallow on the table. The child could eat the marshmallow right away, or he could wait 15 minutes, in which case he would receive a prize in the form of two marshmallows or another treat of his choice. If the child decided to wait, he was left alone in the room with the temptation. If he needed to eat the marshmallow sooner, he could ring a bell to call the researcher, and the experiment would be over.

Little Inez seemed tortured as soon as she was left alone. First, she stared at the marshmallow and looked very sad. Then she reached for the bell, and she almost pressed it, but she pulled her hand back at the last minute. Afterward, she started to laugh out loud as if she had done something funny. For a few minutes she played — she tried to press the bell with one hand, and covered her mouth with the other so as not to laugh out loud. Every so often she would whisper “No, no, no,” as if she were trying to stop herself from doing what she really wanted to do.

She resisted the entire time and received two Oreos as a prize. Javier also managed not to eat his marshmallow. Instead of focusing on the candy, he played with the bell. Monica had a conversation with herself, during which she explained to herself why she should not eat the marshmallow.

Of several hundred tested children, only 30 percent were able to resist the temptation. Mischel continued to follow up with the participants at different stages of their lives while they were at school and later in early adulthood.

It turned out that the 4- and 5-year-old children who managed to resist the temptation to eat the marshmallow fared better in life than those who ate it right away. They had higher SAT scores, were less likely to depend on drugs, made more money, and were more physically fit.

Does this mean that our future is written in a marshmallow? Nothing could be further from the truth. Mischel insists that will power is not just a genetic trait. We can significantly develop and strengthen it over time.

“Self-control skills — both cognitive and emotional — can be assimilated, developed, and actively used until they are automatically activated when we need them,” he writes in his book The Marshmallow Test.

Moreover, you can form will power by using a few key strategies that the children used intuitively in the experiment.

The children who resisted and did not eat the marshmallow often pushed the temptation to the other end of the table and turned their backs to it so that they would not see it. At the same time, they never forgot the main goal — two marshmallows.

According to Mischel, this is one of the basic strategies for postponing immediate gratification.

If the alluring temptation is at hand, “hot” thinking – “I want it now” – activates in our heads. “The domination of this hot thinking probably served our ancestors very well in their natural environment, but today it pushes us to reflexively give in to our temptations, making smart people act not so smart,” explains Mischel in his book.

Physically distancing yourself from the object of desire and focusing on the long-term consequences gives us time to turn on the “cool” (I will wait) system. Waiting engages the prefrontal cortex, which helps us focus our attention on the future.

In subsequent years, Mischel studied the irresistible desire for cigarettes and food. When heavy smokers focused on the long-term effects of smoking (“I could get lung cancer”), their desire to smoke a cigarette became weaker. Similarly, focusing on the consequences of overeating (“I could gain too much weight”) effectively reduced appetite.

In another experiment, Mischel brought the children to a room with Mr. Clown Box, who encouraged them to talk to him and play with him now, instead of finishing their work first and playing later.

Before entering the room, they were told how they could deal with Mr. Clown so as not to fall for the temptation, “If Mr. Clown Box makes noises and asks you to look at him and play with him, then you can simply look at your work and not at him and say, ‘No, I can’t. I’m working.’ The “if/then” plans helped the children stick to their goals, continue working, and resist the temptation to play with the clown.

According to Mischel, the “if/then” construction can help us to control our behavior in everyday life. “If we prepare and test such a plan ahead of time, then self-control will be automatically activated by the stimulus with which it is associated. (“If I walk by the refrigerator, then I will not open the door. If I see a bar, then I will cross the street. If an alarm rings at seven o’clock, then I will go to the gym.”) The more often we repeat and practice these plans, the more they become automatic, making the process effortless,” says Mischel.

3. Look at yourself from a distance

The children did not use this mechanism, but it is necessary to master self-control in certain situations. According to Mischel, stress, especially chronic stress, inhibits self-control. It makes the hot system dominate and diminishes the role of the cool system.

As a result, there is a vicious cycle leading to intensification of stress and increasing its toxic psychological and biological effects. In such circumstances, there is no question of being able to work on self-control and switch to the cool system.

What can we do? “Once again, let’s look at a painful experience, not with our eyes but as if were watching it from a distance, like a fly on the wall. Adopting a different perspective changes our assessment and interpretation of the experience. By increasing the psychological distance that separates us from the event, we mitigate the stress, we cool the hot system and then we can use the prefrontal cortex to reinterpret what has happened, to understand the experience, to find closure and move on,” advises the researcher.

Note: if you decide to do the marshmallow test on your child, remember that the outcome depends on many factors and may be different from a situation in which a stranger runs the test. If the child immediately eats the marshmallow or candy, that is a sign that you should consider teaching him self-control. If the child is not tempted for several minutes, that’s great! But this does not guarantee a great future. In either case, developing self-control is an ongoing task that can only help.