(Exclusive) Cardinal Caffarra: “What Sr. Lucia wrote to me is being fulfilled today” 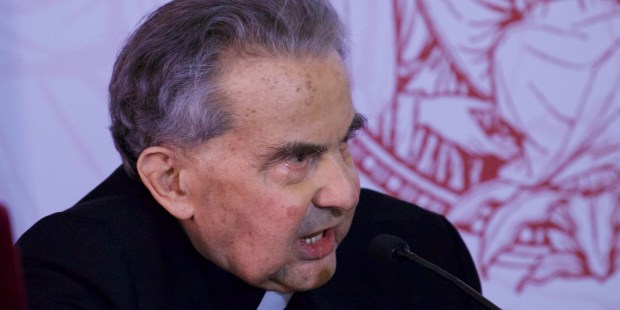 Italian Cardinal Carlo Caffarra, archbishop emeritus of Bologna and founding president of the John Paul II Institute for Studies on Marriage and the Family.
Share
Print
Diane Montagna | May 19, 2017

The Fatima visionary told him: “A time will come when the decisive battle between the kingdom of Christ and Satan will be over marriage and the family.”

VATICAN CITY — Sr. Lucia’s prophetic words that “the decisive battle” between the Lord and Satan would be over marriage and the family “is being fulfilled today,” Cardinal Carlo Caffarra has told Aleteia.

The Italian cardinal was speaking on Friday afternoon, May 19, at the fourth annual ‘Rome Life Forum,’ a gathering which brings together over 100 life and family leaders from over 20 nations to discuss how to defend and strengthen marriage and family life around the world.

He was created a cardinal by Pope Benedict XVI in March 2006. Cardinal Caffarra was one of Pope Francis’ 45 handpicked delegates chosen to attend the Ordinary Synod on the Family in 2015.

In this exclusive interview, given prior to his talk, Cardinal Caffarra also describes how Satan is attempting to destroy the two pillars of creation, so as to fashion his own “anti-creation”; and why, in this battle, woman is “the human being who must be defended the most.”

Your Eminence, what can you tell us about the letter you received from Sr. Lucia while you were working to found the Pontifical John Paul II institute for Marriage and Family in Rome?

In 1981 Pope John Paul II founded the Institute for Studies on Marriage and the Family. The first years (1983-1984) were very difficult. The Institute was not wanted.

Who didn’t want it?

It was not wanted within and outside of the Church, because of the vision it was proposing. And so I was very concerned. Without asking anyone, I thought: “I will write to Sr. Lucia.”

How did that come to mind?

And so, I thought to write to her. So I wrote, but simply saying: “The pope wanted this Institute. We are going through a very difficult time. I ask you only to pray.” And I added: “I do not expect a reply.” Her prayers were enough for me.

As you know, in order to have any contact with Sr. Lucia, even by letter, one needed to go through her bishop. So I sent the letter to the bishop, and he passed it on to Sr. Lucia.

To my great surprise, after not more than two or three weeks, I received a reply. It was a hand-written letter and quite long. I have given sworn testimony of what the letter said. The letter ended, saying (in 1983 or 1984): “Father, a time will come when the decisive battle between the kingdom of Christ and Satan will be over marriage and the family. And those who will work for the good of the family will experience persecution and tribulation. But do not be afraid, because Our Lady has already crushed his head.”

This remained engraved on my heart, and amid all of the difficulties we have encountered — and there have been so, so many — these words have always given me a great strength.

When you initially read Sr. Lucia’s words, did you think she was speaking of that moment in history?

I began thinking a few years ago, after almost thirty years: “Sr. Lucia’s words are taking place.” This decisive battle will be the thesis of my talk today. Satan is constructing and anti-creation.

If we read the second chapter of Genesis, we see that the edifice of creation is founded on two pillars. First, man is not something; he is someone, and therefore he deserves absolute respect. The second pillar is the relationship between man and woman, which is sacred. Between the man and the woman. Because creation finds its completion when God creates the woman. So much so, that after he created woman, the Bible says God rested.

Today, what do we observe? Two terrible events. First, the legitimization of abortion. That is, abortion has become a subjective right of woman. Now, ‘subjective right’ is an ethical category and therefore we are here entering into the world of good and evil, and we say that abortion is a good; it is a right. The second thing we see is the attempt to equate homosexual relationships with marriage. You see that Satan is attempting to threaten and destroy the two pillars so that he can fashion another creation. As if he were provoking the Lord, saying to Him: ‘I will fashion another creation, and man and woman will say: we like better here.’

The Scriptures say the devil is the father of lies, who presents himself as an angel of light…

In my talk, I will explain the words of Jesus, when he says of Satan: “When he lies, he speaks according to his own nature, for he is a liar and the father of lies.” (John 8:44). And so in my opinion — and I do not know if John Paul II had already seen this — in this sort of situation the human being who must be defended the most is the woman. In fact, early on in his pontificate he wrote Mulieris Dignitatem. There he sought to develop a theology of femininity, because he understood that this was a delicate point.

Is woman the battlefield then?

There is a detail in the Bible that has always struck me. After the original sin, God addresses the serpent and says: “I will place enmity between you and the woman.” That is, God puts a particular enmity between the woman and evil, as if woman had a kind of instinct for the good, because God has put this enmity between woman and evil. The text continues: ‘and between your seed and her seed,’ and here the theologians see the foretelling of the Son of Mary. Therefore, woman has a particular involvement that has consequences for culture, society, and the family.

We are commemorating the 100th anniversary of the apparitions of Our Lady to the children of Fatima. What is the message today?

For me, the originality of Fatima is this: At Fatima, Our Lady prophesied. In other apparitions, she doesn’t prophecy; she exhorts. Like at Lourdes: do penance, pray, tell the priests to build a chapel in this spot. She exhorts and recalls the strong exhortations of Jesus to penance and prayer. But at Fatima she prophesies; that is, she enters into and interprets human events. She had never done this before.

Yes, she fully entered into [Our Lady’s prophecy] and has left her Memoires. Some are very impressive. She sensed that this was the task Our Lady had given her, that is, to hand on and interpret this prophecy.

And were Sr. Lucia’s words to you about the “decisive battle” also a prophecy?

Yes, absolutely. What Sr. Lucia wrote to me is being fulfilled today.