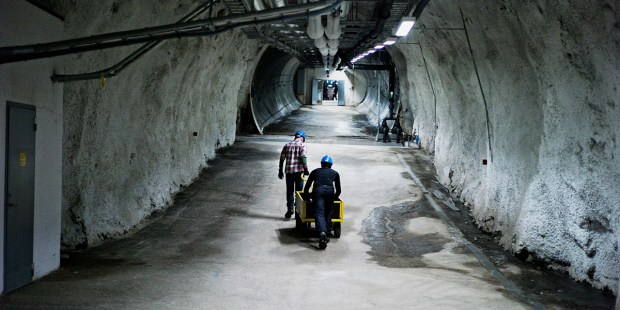 We thought it was safe deep below the Arctic Circle.

Located deep within the Arctic Circle, hidden in a mountain, is the Svalbard Global Seed Vault. Established by the Norwegian government, the vault is filled with packages of seeds for all the world’s food plants. Meant to protect our crops from cataclysmic disaster, natural or man-made, it seems there was one event not planned for: global warming.

The Guardian reports that as the last year produced record high temperatures, the permafrost surrounding the vault began to melt, causing a breach.

In an interview with The Guardian, Norwegian official Hege Njaa Aschim explained what went wrong:

“It was not in our plans to think that the permafrost would not be there and that it would experience extreme weather like that.

“A lot of water went into the start of the tunnel and then it froze to ice, so it was like a glacier when you went in,” she told the Guardian. Fortunately, the meltwater did not reach the vault itself, the ice has been hacked out, and the precious seeds remain safe for now at the required storage temperature of -18C.

While the integrity of the project remains, officials will have to find a solution to ensure their continuing safety in a facility which Åsmund Asdal from the Nordic Genetic Resource Center claims “is supposed to last for eternity.”