The secret to building a great relationship with your kids 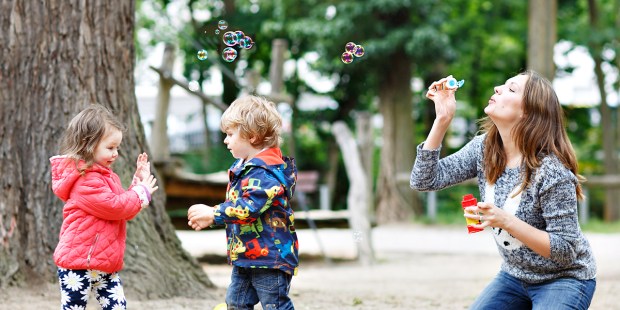 From toddlers to teens, this is the best way to connect, bond, rebuild, and teach.

Imagine a parent-child relationship based solely on authority with no spontaneity. It would completely eclipse the child’s self-confidence, joy, and sense of being seen and valued. And once the child is free from his parents’ authority, what becomes of that relationship? Probably not much. At best, the child retains a sense of duty towards his parents; and at worst, he feels indifference or hatred, since he feels that he never really existed in their eyes.

Read more:
Do you follow these 5 tribal parenting rules?

Nobody wants that. So, what should be added to the relationship between parents and children so that it is imprinted with lasting love, affection, connection, and trust? Play! And humor!

Playing to build a strong and sustainable parent-child relationship

Psychologist Lawrence Cohen, who specializes in play therapy, is convinced that a strong attachment to parents is fundamental to children’s development. To this end, he proposes basing the parent-child relationship not just on authority, but also on play, with the notion of “playful parenting.”

In Playful Parenting: An Exciting New Approach to Raising Children That Will Help You Nurture Close Connection, Solve Behavior Problems, and Encourage Confidence, Lawrence Cohen writes, “Play is one of the best ways to get in touch with a child, get him out of his isolation, or lead him to change his behavior until connection and trust are restored.”

Putting ourselves at the child’s level and entering his or her world are the keys to winning trust and expressing love. Lawrence Cohen adds, “Play and humor make it possible to reestablish that deep emotional bond between parents and children. Play, with all its exuberance and delighted togetherness, can ease the stress of parenting. Playful parenting is a way to enter a child’s world, on the child’s terms, in order to foster closeness, confidence, and connection.”

Playing feeds a fundamental need in the child: the need for attachment

What is the need for attachment? The psychoanalyst John Bowlby defines it as an instinct leading to a lifelong need to be listened to, understood, and supported by one or more loved ones. It has been proven that children have a vital need for attachment.

“One can illustrate the need for attachment with the image of a tank emptied by hunger, fatigue, isolation, or injury. How can we fill that tank? By loving the child, giving him physical contact, tenderness, and by comforting or nourishing him. By calming him when he’s upset, and playing and discussing with him when he’s in a good mood,” explains Lawrence Cohen. According to the psychologist, most behavior problems in children are linked to a problem of attachment: the tank is not filled enough or not replenished often enough. Play is one way that the adult can fill or plug that tank’s leaks.

To respect the rules, not to cheat, to know how to lose, to manage one’s emotions, to wait for one’s turn, to team up … There are so many behaviors that can be learned through play, and which kids will need to draw on in “real life.”

What about parents who do not like to play?

Play does not necessarily mean interminable games of Risk or Monopoly, nor hours spent cross-legged playing Barbie or Legos. Psychotherapist Isabelle Filliozat refers to play as “all playful and enjoyable interactions between parents and children.” This can be a very short game, a mime, making a funny voice during dinner, or just sitting with your child while he or she builds a tower. It might seem boring sometimes. But Filliozat insists, “It’s worth it because the game is a wonderful opportunity to forge bonds.”

This article was originally published in the French Edition of Aleteia