5 Ways to give persecuted Christians help beyond the hashtag 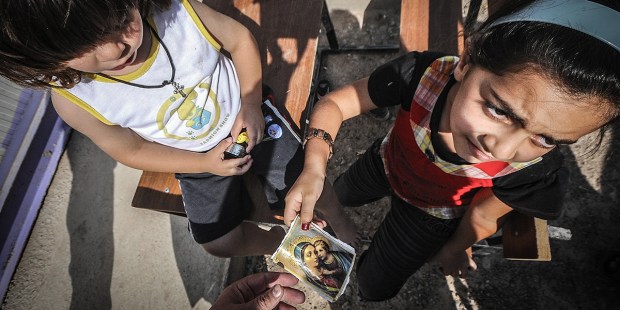 As St. James might have written, “Sympathy without works is dead…”

We may not care for persecuted Christians nearly as much as we think we do. Some people can feel deep sympathy for people far away from them, the depth of sympathy they feel for a child or friend.

I know myself and others, and the blind ease with which we use others’ stories to support our own. I know the excitement of finding a story that illustrates a belief I already have; it gives me another weapon. Persecuted Christians provide great weapons. I also know the pleasures of feeling upset. A fallen human being can easily feel upset because he enjoys it, when it doesn’t cost him anything.

In other words, we can easily use someone else’s suffering to advance our preferred causes, especially our culture war causes, and supply us with enjoyable feelings. We may sincerely feel sympathy for persecuted Christians, but our sincerity doesn’t always go as deep or run as pure as we think.

We too easily become addicted to the material religious studies professor Alan Levinovitz calls “spiritual pornography “spiritual pornography.” He applies the term to culture-warring books, but it applies to a lot of what Christians do. (I want to note that I’m not commenting on his review of the books, as both were written by friends.)

You can see how we could easily tell this kind of story about persecuted Christians, especially if their persecutors are liberals or Muslims. Yes, yes! take that! you wicked liberals, you evil Muslims. The culture war machine devours everything it can. We hit “share” on our Facebook pages and feel we’ve struck a blow for truth and justice.

This doesn’t serve persecuted Christians. It will make us feel good, but it doesn’t help them. They need enacted sympathy.

Here are a few suggestions for real support of our suffering brothers and sisters in Christ.

First, pray for them, but not just as another general item in your list of intercessions. You might say an Our Father and a Hail Mary for each martyr by name. You might pray for the Christians in a specific town or region or church. Make your prayers “granular,” focused. Give the suffering a few extra minutes of your day.

Second, give money to the Catholic agencies that help these Christians, not as part of but on top of your regular giving. Give up your daily fancy coffee or a second beer at the pub and donate the money saved. While you’re at  it, let that tiny, tiny, tiny sacrifice give you some small feeling for the huge sacrifices they make every day.

Third, learn about their churches and their lives in some detail. When you love someone, you want to know all about them: who they are, where they came from, what they’ve done, what happened to them in the past, who loves them and who hates them. The reverse works too, I think. You begin to love those you learn about.

Fourth, advertise their sufferings and struggles. Share the links to their stories. Even better, write about them yourself when you can (see my third suggestion). This will show your own engagement with their lives. That will prove more effective in moving others to share your concern than just posting another link.

Fifth, and maybe most difficult of all: Listen to Christian leaders in the countries where Christians live as a minority. Don’t accept the major media and the government’s stories about what happens in those countries. Their leaders challenge the dominant American narrative, especially the one shared by right and left, the mainstream American consensus we assume must be true. Factor their interests into choosing which the candidates and causes to support.

To reverse the old joke about romantic relationships: It’s not about us. It’s about them.