6 Women travelers of the 20th century you should read 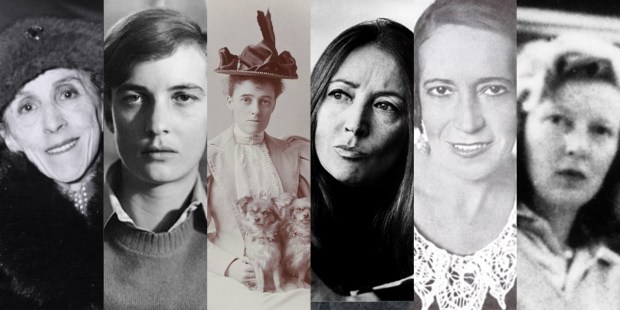 Great writers in literature and journalism, from Edith Wharton to Oriana Fallaci

Early 20th-century writers like Hemingway, Faulkner and Fitzgerald are well-known. During the same period, however, many women writers and journalists traveled the world and narrated their experiences in chronicles, articles, books, and other works that have gone down in the history of literature and journalism. Yet, they are still not well known. Here, we present six of them.

Edith Wharton was the first woman writer to win a Pulitzer Prize. Her novels analyze the upper class of New York society at the end of the 19th century and the beginning of the 20th. She was a great lover of Europe, where she lived for various periods of time, and where she eventually decided to stay. Wharton crossed the Atlantic 66 times during her life. She lived in Paris when the First World War broke out, and—thanks to her contacts in the French government—obtained permission to travel on motorbike along the front lines. During the war, her social work was also notable.

Karen Blixen wrote under the pseudonym Isak Dinesen, although she also published under the names Osceola and Pierre Andrézel. For 20 years, she owned a farm in Kenya, and after she returned to her country, Denmark, she always felt nostalgic for Africa. In 1937, her work Out of Africa, in which she explained some of her experiences, made her famous. Her success only increased when a Hollywood film was made based on this book. In the 1950s, she became very popular in her home country for her broadcasts on Danish radio.

This writer from Catalonia was inclined to literature from her early youth. When she married a Swiss engineer and traveled to Polynesia, she had the opportunity to write many reports on Tahiti, which were published in D’Ací i Allà magazine. After living for three years in Polynesia, she continued to contribute to important publications in Catalonia and, at the same time, began a period of intense political activity and struggle for women’s rights. She also traveled to Morocco, interested as she was in getting to know the country’s culture and the situation of women there. When the Spanish Civil War broke out, she exiled herself to Switzerland. She authored a biography of her father, the writer Prudenci Bertrana. The year 2017 has been declared a “Bertrana Year” in their homeland, during which the contributions of both father and daughter are being celebrated with a series of cultural events.

A writer, photographer, and journalist, she was also a traveler seduced by the Orient—especially by Persia. She traveled across Afghanistan in a Ford, in the company of Ella Maillart. Although she was a young Swiss aristocrat, she never fit in with the luxurious environment in which she lived. Thomas Mann called her “a ravaged angel.” American writer Carson McCullers dedicated one of her most important works to her, Reflections in a Golden Eye.

A journalist by vocation, Martha Gellhorn wished to exercise her profession far away from America. To this end, she traveled to Europe in the 1930s. She is known for being an outstanding reporter during the Second World War. In addition, she covered events like the Great Depression, the Spanish Civil War, and the Vietnam War. Her work reached the ears of Eleanor Roosevelt, with whom she established a close relationship, as both were fighting against social injustice. She was the third wife of Ernest Hemingway, whom she divorced.

Oriana Fallaci was an Italian journalist who participated, from a very young age, in the Anti-Fascist Resistance. She left the study of medicine for journalism, and covered the most important events of the time, such as the Vietnam War and the death of Martin Luther King. She was an outstanding interviewer of the most powerful women and men of the world (such as Kissinger, Arafat, and Ghandi), and published novels, essays, anthologies, and countless chronicles. She contributed to prestigious periodicals including Life, The New York Times, The Washington Post, and Der Spiegel. She dedicated the last years of her life to writing polemics against Islam.