The whole mystery of Christian prayer is summed up in this one word, says Pope 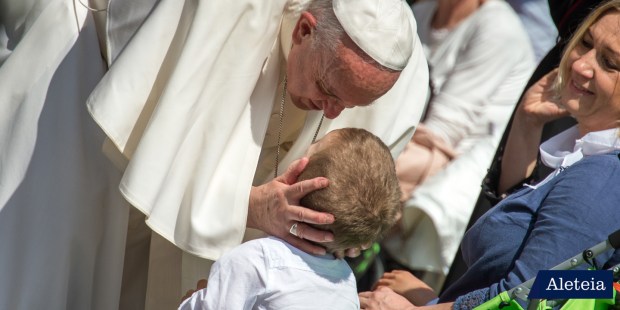 There was something fascinating about Jesus’ prayer …

VATICAN CITY — “The whole mystery of Christian prayer can be summed up in one word: Father,” Pope Francis said today at his general audience.

Speaking to faithful and pilgrims gathered in St. Peter’s Square for the Wednesday audience, the pope continued his catechesis series on Christian hope by reflecting today on the Fatherhood of God as the source of all our hope.

The boldness of Christianity

Here we see the great religious revolution introduced by Christianity, Pope Francis said, that taught by the Savior’s command, we dare to speak to the transcendent and all-holy God as children speak, with complete trust, to a loving father.

“The whole mystery of Christian prayer is summed up here, in this word: to have the courage to call God ‘Father,’” Pope Francis explained. “The liturgy affirms this when, inviting us to pray the prayer that Jesus taught us, it uses the expression “we dare to say.”

He added that calling on God as ‘Father’ “puts us in a relationship of trust with Him, like a child that turns to his papa, knowing he is loved and cared for by him.”

“This is the great revolution that Christianity imparts to the religious psychology of man,” the pope continued. “The mystery of God, which always fascinates us and makes us feel small, no longer makes us afraid. It does not crush us or make us anxious.”

This is a difficult revolution to welcome the human soul, the pope acknowledged. “So much so that even in the accounts of the Resurrection it is said that the women, after seeing the empty tomb and the angel, “fled … for trembling and astonishment had come upon them” (Mk 16: 8). But Jesus reveals to us that God is good Father, and He tells us, “Do not be afraid!”

Francis said Jesus speaks to us of the Father’s unconditional love especially in the parable of the merciful father, who welcomes his prodigal son with supreme forgiveness. “What an unfathomable mystery it is that God nourishes this kind of love towards his children!” he said.

The fascinating mystery of Jesus’ prayer

“Perhaps this is why,” Pope Francis suggested, “in calling to mind the heart of the Christian mystery, St. Paul did not translate into Greek the Aramaic word that Jesus used to address God the Father: ‘Abba’.”

Twice in his epistles (cf Roman 8:15; Gal 4:6) St. Paul touches on this theme, the pope explained, and twice he leaves the Aramaic word untranslated, just as it would have come from the lips of Jesus — “Abbà” — a word more intimate than “Father,” and that we might translate as “papa or daddy.”

“There was something fascinating about Jesus’ prayer,” the pope told pilgrims gathered in St. Peter’s Square. “The disciples were struck especially by the fact that, in the morning and in the evening, he would retire in solitude and ‘immerse’ himself in prayer.”

Therefore, one day they asked him to teach them to pray (cf. Lk 11:1). And then it was that Jesus handed on what has become the Christian prayer par excellence: the ‘Our Father.’

“Dear brothers and sisters, we are never alone. We can be distant and hostile; we can even declare ourselves to be ‘without God.’ But the Gospel of Jesus Christ reveals to us that God cannot be without us: He will never be a God ‘without man’; He is the one who cannot be without us, and this is a great mystery! God cannot be God without man: this is a great mystery! And this certainty is the source of our hope, which we find in all the invocations of the ‘Our Father.’”

“When we need help,” he said, “Jesus does not tell us to give up and close in on ourselves, but to turn to the Father and ask him with trust. All of our needs, from the most obvious and everyday — like food, health, and work — to being forgiven and sustained in temptation, are not a mirror of our solitude: instead there is a Father who is always watching us with love and who surely will not abandon us.”

The Holy Father concluded his catechesis, inviting everyone to think about all their needs, and about the Father’s love, and in this awareness to pray the ‘Our Father.’

Look to the Sacred Heart

At the end of the audience, during his greetings to young people, newlyweds and the sick, the Pope also recalled that June is the month traditionally dedicated to the Sacred Heart of Jesus.

He particularly encouraged newlyweds to look to this Heart “to learn unconditional love.”