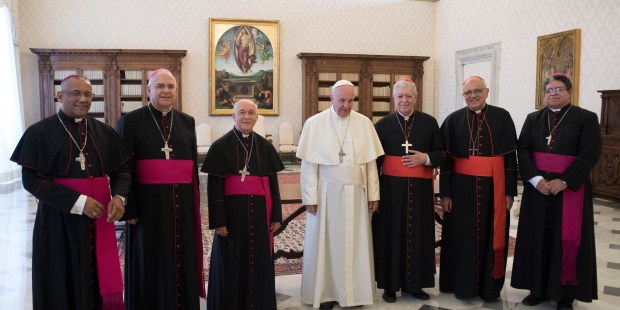 After meeting, Venezuelan bishops have pope’s “full support” amid looming “constitutionalization of a military, Marxist-socialist and communist dictatorship.”

VATICAN CITY — Pope Francis is in “full agreement” with the Venezuelan Bishops on the crisis facing their nation, the president of the Episcopal Conference of Venezuala (CEV), Archbishop Diego Padrón Sanchez, said today.

One day after the pope’s private meeting with the Venezuelan bishops at the Vatican, Archbishop Padrón told SIR news agency “there is no distance” between the pope and the bishops of Venezuala.

“We totally deny” the propaganda of the current government which pretends to have the pope’s support, Archbishop Padrón therefore insisted. On several occasions, the President of Venezuala, Nicolas Madúro, has claimed he has Pope Francis’ support over the bishops of Venezuela.

In a letter delivered to the pope at yesterday’s meeting, the President of the Bishops’ Conference told the Holy Father: “In Venezuela, there is no longer an ideological conflict between right and left or between ‘patriots’ and ‘escualidos’.” Rather, he said, there exists “a struggle between a dictatorship — a self-referential government that serves only its own interests — and a people that cries out for freedom and anxiously seeks — at the risk of the lives of the young —food, medicine, security, work and fair elections, full liberties, and autonomous public powers that put the common good and social peace first.”

The goal of the Madúra government, Archbishop Padrón told SIR, is “to remain in power at all costs.” It will not hesitate to make its own people suffer to achieve this end, by depriving them of basic needs such as food and medical care, in order to “keep them submissive,” he added.

In the past two months, 66 demonstrators have died in Venezuela, and some 3,0000 have been imprisoned. At yesterday’s meeting, the bishops presented a list of the deceased to Pope Francis, who assured them of his “great closeness” to the families.

During yesterday’s meeting, Pope Francis invited the bishops to resume their mediation between the government and the opposition, adopting as their “Magna Carta” the letter sent by Vatican Secretary of State, Cardinal Pietro Parolin, to the Government and to the Opposition on December 1, 2016.

In the letter, the Vatican prelate put forward four prerequisites for dialogue: the opening of a humanitarian channel; respect for the National Assembly; the release of political prisoners; and the establishment of an electoral process.

However, Archbishop Padrón added, “dialogue means listening to and respecting the people.”

That is why the Venezuelan Bishops Conference has proposed holding a consultative referendum on the government’s decision to convene a constituent assembly, he said.

In their letter to the pope for yesterday’s meeting, the Venezuelan Episcopate called President Madúra’s intention to convene a National Constituent Assembly, without directly consulting the people, both “unnecessary and unequal from a social point of view” and consequently “inappropriate and dangerous.”

The assembly, they said, which is set for the end of July, “will be imposed by force, and its results will be the constitutionalization of a military, Marxist-socialist and communist dictatorship.”

“It will leave the current government in power, annul established public powers, particularly of the current National Assembly (which is representative of popular sovereignty); increase persecution and exile of opponents of the dominant political system; and expand facilities for corruption.”

“If adopted,” the bishops said, it will mean “greater controls on freedom of expression, including religious freedom, and greater repression of citizenship are not ruled out.”

“For these and other reasons, the Venezuelan Episcopal Conference categorically rejects the installation and development of this Constituent Assembly,” the letter stated.

The CEV, its president said, does not intend to enter into a kind of “legal discussion” concerning the constitution. It’s primary focus, he said, is “the social problem.”

The Venezuelan government had strongly criticized the bishops for not responding to its invitation to participate in the drafting of the text. The prelates had been accused of not obeying the Pope, who had asked them in a May 5 letter to do “everything necessary” to help put an end to the crisis.

It is not a new constitution that the country needs, Archbishop Padrón said, but “food, care, security, respect and the right to protest freely.”

In their meeting yesterday, Pope Francis asked the Venezualan bishops to further strengthen the work of Caritas in the country. In their letter to the pope, the president of the Venezuelan Bishops Conference agreed that Caritas Venezuela “could serve as instrument for at least medicine to arrive in time.” But he added that bureaucratic difficulties imposed by the government are leading to an increasingly “uphill battle” that is “fraught with obstacles.”

This may lead the pope to launch an international collection on behalf of Venezuela, to bolster resources, according to Avvenire, the newspaper of the Italian Bishops Conference.

Since his election in 2013, Pope Francis has personally been involved on several occasions in the political situation in Venezuela. This direct involvement has increased with the current crisis.

Vatican Secretary of State, Cardinal Pietro Parolin, has also been monitoring the situation closely, having served as apostolic nuncio in Caracas from 2009-2013.