From 8 founding members, Institute now has about 100 professed friars, serving in 6 countries

Last December 8, the Franciscan Friars of the Renewal released a statement announcing their rejoicing at “being granted recognition as a religious institute of pontifical right.”

The official decree had been signed on June 13, 2016 (feast of a famous Franciscan, St. Anthony of Padua) — and this week, the friars took to the streets to celebrate a year since their recognition as an institute approved by the Holy See. A special Mass at Sts. Peter and Paul parish in the Bronx was followed by a block party at the St. Crispin Friary.

At the same time, the Franciscan Friars of the Renewal (CFRs) are also celebrating their 30th year — they are a “baby congregation” in the life of the Church, having been founded in 1987, in the Archdiocese of New York, when “eight American Capuchins desired a form of Franciscan life dedicated specifically to service of the poor and evangelization,” as the statement noted.

Cardinal John O’Connor, then archbishop of New York, established the group as an institute of diocesan right.

Now the CFRs are recognized as an institute of pontifical right.

Father Mark Gantley, writing for EWTN Catholic Q and A, explained the difference:

Institutes of consecrated life and societies of apostolic life can be of diocesan right or of pontifical right. Being of “diocesan right” means that the group is authorized by a diocesan bishop and exists within his diocese. The bishop is then the authority that approves its proper laws. Once a group begins to grow and expand into other dioceses, it often seeks to become “pontifical right,” which means that it is authorized by the pope. The Congregation for Consecrated Life and Societies of Apostolic Life handles the oversight of all such groups that are of “pontifical right.”

(Read more here about the different ways to live a consecrated life in the Church, i.e., professing poverty, chastity, and obedience).

In these 30 years, the CFRs have seen marked growth. Today, there are about 100 perpetually professed members of the institute serving in 10 dioceses and archdioceses, in six countries.

According to the CFR statement, the Holy See describes the Institute’s charism accordingly: “After the manner of St. Francis of Assisi, the friars seek to follow in the footsteps of Jesus, as a prophetic witness that life is a pilgrimage to the Father, of faith, hope, and love of God and neighbor, made possible by the Holy Spirit. They participate in Christ’s renewal of all things through their prayer, fraternal life, service of the poor, and evangelization, as a complement to the work of those whose mission is to serve parochially.” 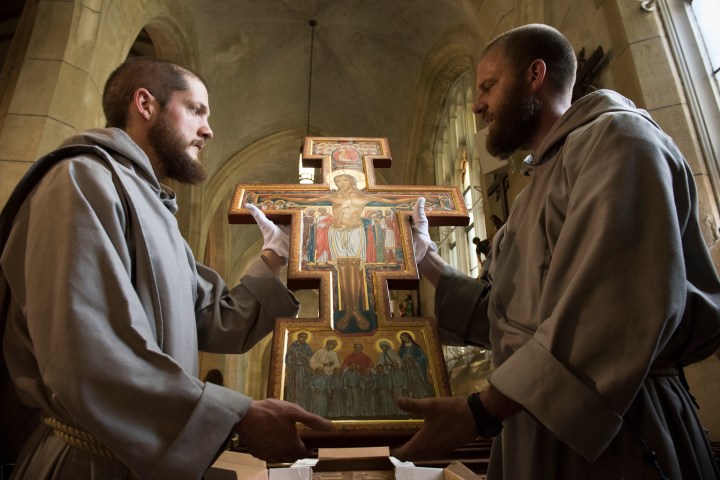