This is why churches have stained glass windows

The architectural feature proved to be a valuable tool in teaching many spiritual truths.

Light is a common spiritual theme in Christian theology. In Genesis God’s first words at creation were, “‘Let there be light’; and there was light. And God saw that the light was good” (Genesis 1:3-4).

Jesus even went so far as to identify himself with light, saying, “I am the light of the world; he who follows me will not walk in darkness, but will have the light of life” (John 8:12).

With this in mind it was fitting for Christians to spend much time and energy developing the design of windows in churches. Windows funnel the light of the sun and dispel the darkness of the shadows. Architects saw them as the perfect opportunity to highlight a spiritual truth while serving a functional purpose.

However, stained glass windows as we know them today were not developed until the 10th century. Prior to that the Egyptians and Romans had developed a technique for creating small colored glass objects, but did not use the technology for large scale windows.

The oldest surviving complete stained glass window is found in the Augsburg Cathedral in Germany. It was constructed in the 11th century and was part of a project to make the windows larger and more beautiful. These windows not only served the spiritual purpose of bringing to mind how the light of God shatters our darkness, but also proved to be an important catechetical tool.

It was during the medieval period that stained glass windows became a primary way to teach the illiterate laity the many stories of the Bible. Often these windows, depending on the size of the church, would go from Genesis to Revelation, highlighting the most important stories in Salvation History.

The history of the Bible depicted in these windows would also be connected to a brief representation of Church history. Saints were also shown in these windows and presented as a daily inspiration for the people struggling on their Christian journey. The windows were also used to illustrate the illumination of the mind with divine knowledge and how grace penetrates our world.

As technology improved over time, stained glass windows grew larger and larger, becoming extremely complicated and full of all kinds of symbolism.

On account of the complex artistry involved, stained glass windows were typically the last item to be installed in a new church and many years would pass until the final window was completed. The windows were also very expensive to produce and so to encourage donations, names of patrons would be etched on the bottom. In larger medieval churches the patrons themselves would even be depicted along with the saints.

Stained glass windows are some of the most beautiful treasures of Christian churches and are there to inspire and teach the faithful many spiritual truths. They remain an essential part of church architecture and continue to be used in new constructions throughout the world. 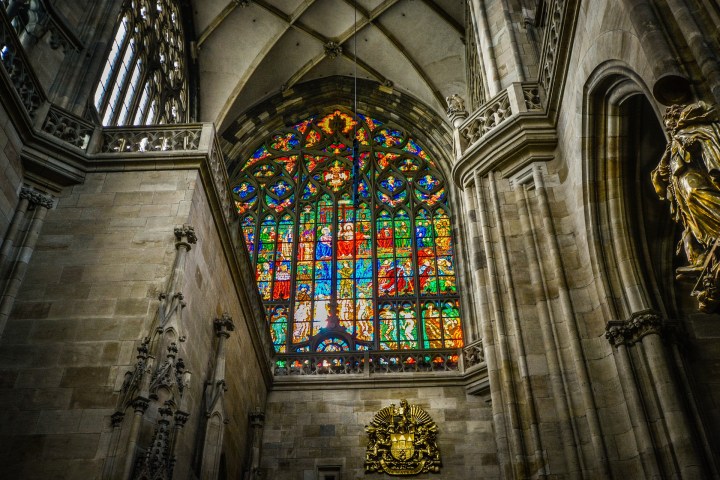 Read more:
Is this the most beautiful church in the US?