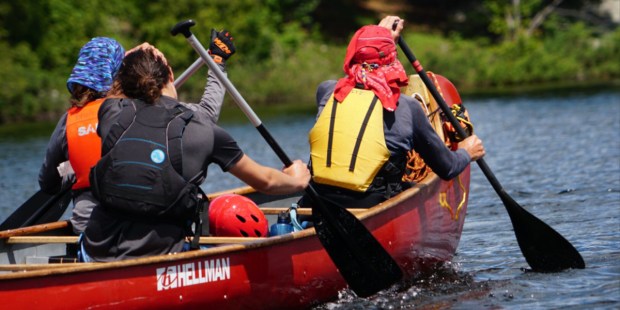 To celebrate their country’s 150th birthday, Indigenous, French, and English Canadians join Jesuits on a river of remembrance and regret.

If you are going to travel by canoe you generally want to pick travel companions you know well, who have paddling experience. After all, there is nowhere to hide on a canoe. But one group of paddlers, made up mostly of people who did not know each other very well, has embarked on an 850-kilometer (approximately 528-mile) journey to celebrate Canada’s 150th birthday.

The Jesuits in English Canada organized the canoe pilgrimage as their contribution towards promoting dialogue and reconciliation among Indigenous and non-Indigenous and Canadians.

A group of 30 people, made up of  Indigenous Canadians, French Canadians, English Canadians and Jesuits, set off from the Martyrs’ Shrine in Midland, Ontario, on July 21. They expect to arrive at Kahnawake, a territory close to Montreal that belongs to the Mohawk, by August 15.

The group is following a traditional trading route that was once traveled by Samuel de Champlain, the man who administered and mapped the colony of New France, and the Jesuit missionary St. Jean de Brebeuf, who was martyred in 1649.

Kevin Kelly, a Jesuit scholastic who helped organize the pilgrimage, told The Catholic Register that for him the pilgrimage is an important step in healing the relationship between Canada and its Indigenous people because “this is about the fundamentally human practice of how do we better communicate.”

For six years, a Truth and Reconciliation commission traveled the country collecting stories from survivors in an attempt to begin the healing process. In 2015 the commission released its final report, which included 94 “calls to action.”

The Jesuits in English Canada see the canoe pilgrimage as a direct answer to the commission’s calls to action. Erik Sorensen, a Jesuit who helped plan the pilgrimage, told the Orillia Packet newspaper the voyage was also a way for the Jesuits to come to terms with the fact that their congregation operated a residential school. “There is a collective healing that I am participating in,” he said.

Along the route paddlers stopped in national parks and in Indigenous territories where they set up camp for the night. While some groups are eagerly welcoming the paddlers, preparing meals and joining in their daily prayers, some Indigenous groups preferred not to draw attention to the group while they camp on Indigenous land. Kelly said, “We’re OK with that, we understand what that looks like … We’re just at the start of what moving forward in reconciliation out of the TRC looks like … It’s really a work in progress.”