First rule for lectors: Remember that you’re not a public speaker 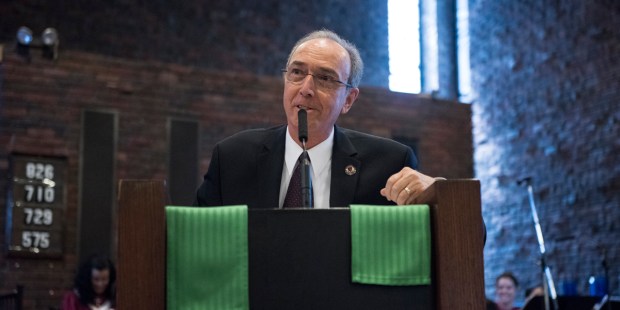 Public reading is not public speaking, and lectoring requires nothing less, not more, of the lector.

In the past I have taught college speech, many times. Along with requiring students to deliver the usual species of speeches conforming to the usual categories, I always included sections on poetry recitation and public reading before a group. Both are art forms, I think (I may exaggerate but at least I taught them that way). Certainly they are a craft, and lectoring is a craft by itself.

Done well, reading scripture publicly is more than just a Bible reading. It is the lector’s job to read a passage into life so we may hear God’s story for us, first hand, for ourselves.

I could not disagree more. So let me say it again: public reading is not public speaking. Here’s why:

In public speaking, the speaker must visibly connect with the audience to establish rapport and create an authentic relationship. Public speaking require sustained eye-contact, and gesture, and an engaged and energetic body language with facial emphasis; all of that. The speaker puts these together with the words to draw the listener’s attention to himself, to gain an audience for what he says. It is the speaker’s presence in the moment that conveys as much of the speech to the hearer as the words themselves. We see the speaker and thereby learn something about his or her character, all to the point so we gain a better appreciation of his remarks.

But a lector reading in public should be invisible, hidden within the text being read. A public reading of scripture in worship is an appointment with a text from scripture, and often a text that is not unfamiliar to the listeners. It is the text―familiar though it may be―that must capture our attention, not the lector. Looking up from the text to catch somebody’s eye is a distraction from the text. The lector must stand aside, so to speak, from him or herself. Thus, the lector’s job is to speak the text in such a way that the text itself, and not the lector, may to speak to us.

There are only two occasions that actually require a lector to look at anybody the congregation, and neither happens during the reading itself. The first is the introductory proclamation line, “A reading from …”  Look those people straight in the eye when you do it, so they’ll know you’re up to something serious. Pause after saying the introduction and mentally count to three before launching into the text.

The last occasion is the concluding proclamation, “The Word of the Lord.” After the reading, pause again, same count to three, and then say the conclusion. Punctuated silence is the best attention-getter available. Use it well.

Preparation? Practice aloud; reading the text 10 times is not too many. Out loud. That is after you have read the text silently to yourself perhaps an equal number of times. You must become familiar with the words, their flow, and learn where a pause or vocal emphasis will aid clarity.

Word emphasis? Explore the different ways the text might be illuminated by the tone of your voice. There is irony in scripture, humor, playfulness, somber warnings, heart-rending lament, conversational exchanges, snarky jokes (“Can anything good come from Nazareth?”), narration, and more. I cannot think of any verbal characterization that is not in scripture. Let the weight of the words indicate mood and tone and delivery for the reading.

Microphone? Do not depend on the microphone to project your voice. Find the right distance you need from it so your voice is neither lost nor overwhelming. And listen for your p’s and t’s; they sometimes explode out of a sound system like cap pistols. Move slightly back from the microphone if you hear the pops as you practice.

There you go. That’s some of the technical stuff.

Non-technical: Say a prayer, one of gratitude for the service you have been selected to perform. In fact, start there first, and then tackle the technique.

This is a revised version of a piece published online elsewhere.