What is a “Catholic Hipster” and how can we become one? 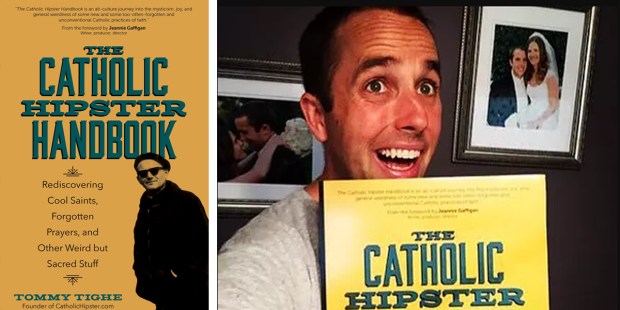 Tommy Tighe is a popular blogger and occasional Aleteia contributor who while on Twitter entertains himself, and many others, with his humorous and pithy tweets and interactions with friends who may be said to make up the “Catholic Hipster” wing of what is referred to (for better or worse) as “Catholic Twitter.”

What inspired the book?

Hipsters are cool. They buy local food, drink craft beer, take pride in doing things the hard way, and live a life that can best be described as countercultural. But what if I told you there’s an even more countercultural group than the ones wearing thick-rimmed glass at your local farmer’s market? What if I told you this group has existed for 2,000 years? What if I told you this group was called the Catholic Church?! The Catholic Hipster Handbook: Rediscovering Cool Saints, Forgotten Prayers, and Other Weird but Sacred Stuff is a journey toward reclaiming Catholic Cool, a book that shows just how awesome it is to be Catholic!

What story or anecdote (or piece of advice) in this book most personally resonated with you?

Anna Mitchell’s contribution Putting the Divine Office to Work in our Lives resonated deeply with me, as I have found the Liturgy of the Hours to be a great way to help me stay focused on praying throughout the day.

While the Liturgy of the Hours seems overwhelming at first, it is such an awesome way to join in with the prayer of the universal Church both past, present, and future, and Anna presents the power and joy of praying the Divine Office in a fantastic way!

Did writing this book teach you anything?

If there is one person you want to reach with this book, who would that be?

I would love this book to get into the hands of Catholics who have left for college or are just starting their young families, lukewarm in their faith, not sure about the role it can play in their lives. My hope is that they’ll pick up the book, realize just how cool it is to be Catholic, and be drawn back to the faith and the Church founded by Christ.

What is the ideal beverage to have in hand while reading your book?

If you’re reading the book in the morning while eating your locally sourced kale omelet using eggs from your backyard chickens, you’ve got to have a cup of cold brew coffee close at hand. If you’re flipping through the chapters after the kids are tucked in bed, it’s got to be a tasty craft beer that nobody’s ever heard of before.