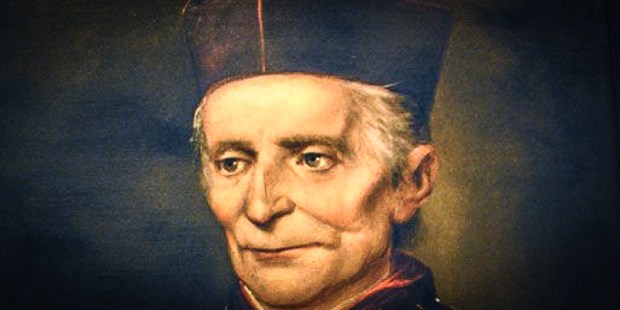 Servant of God Simon Bruté was a highly influential Catholic leader in the United States.

Born in 1779 at Rennes, France, Simon Bruté lived during the tumultuous French Revolution and witnessed the open persecution of Catholic priests. He frequently visited the prisons where these men were held and often brought with him the Blessed Sacrament, hidden in his clothes.

Then in 1796 Bruté studied medicine, but never became a doctor. Soon after his graduation he pursued a vocation with the Society of Saint-Sulpice and was ordained a priest on June 11, 1808. Two years later he set sail for the United States as a missionary.

Upon arrival he was put to work teaching philosophy at St. Mary’s College, Baltimore, as well as some pastoral work in Maryland. He was eventually transferred to Mt. St. Mary’s in Emmitsburg and became known as the “Angel of the Mount.” During this time he became the spiritual director and friend of St. Elizabeth Ann Seton.

After a few years he was appointed bishop to the newly created Diocese of Vincennes, which at the time consisted of the entire state of Indiana. It would later be reorganized as the Archdiocese of Indianapolis.

It was a challenging assignment for a poor diocese. Bruté would make trips back to France to solicit priests and funds for new churches. Near the end of his life Bishop Bruté sent his Vicar-General to France and eventually convinced St. Theodore Guérin to bring her new community to Indiana.

Read more:
From France to the woodlands of Indiana: An unlikely journey to sainthood

Bishop Bruté was known during his life for his holiness and intellect. President John Quincy Adams wrote about Bruté, saying he was “the most learned man of his day in America.”

Bruté had a deep devotion to the Eucharist and wrote, “There comes a kind of resolution to go after the manner of the Apostles in the greatest possible simplicity. For each moment the Lord has in view means of grace for me and for all—the altar, the sacraments, prayer, instruction.”

He also possessed a deep humility, as can be seen from these lines from his first pastoral letter, “unworthy as I am of so great an honor, and of myself unequal of the charge, my only trust is in God; and, therefore, earnestly calling for your prayers, that I may obtain His Divine assistance, I come to be your chief pastor.”

Bishop Bruté died in 1839, but it wasn’t until 2005 that his cause for canonization was officially opened. He has been given the title “Servant of God” and the Archdiocese of Indianapolis continues to pore over all the documentation of his life in order to send what they need to Rome to promote the cause.