The demonic vision that inspired the St. Michael Prayer 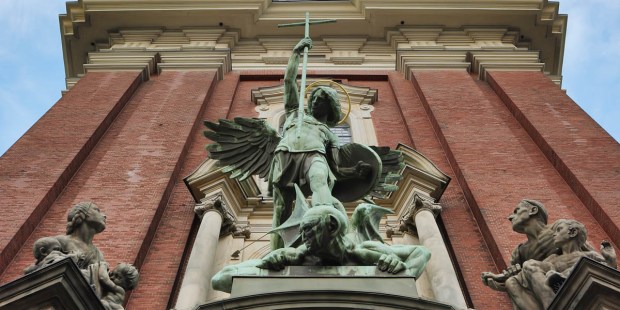 Some reports claim that during the vision Pope Leo XIII was “pale and fearful.”

In 1886 Pope Leo XIII instituted what would later be known as the “Leonine Prayers” after Mass (something familiar to those who have attended a Low Mass in the Extraordinary Form). These prayers include the well-known Prayer to St. Michael. Not much is known for certain about the origin of this prayer, but it is believed by many historians that Pope Leo had a profound vision that sparked its creation.

According to Kevin Symonds, author of Pope Leo XIII and the Prayer to St. Michael, the vision likely occurred between 1884 and 1886 and took place during the celebration of Mass. Several different reports relate that Pope Leo had a visible change come over his face during the vision and one claims that his face was “pale and fearful.”

A cardinal at the time who knew the pope’s private secretary explains that “Pope Leo XIII truly had a vision of demonic spirits, who were gathering on the Eternal City (Rome). From that experience … comes the prayer which he wanted the whole Church to recite.”

As time went on a few embellishments started to appear regarding the vision, claiming that Pope Leo witnessed a conversation between Jesus and Satan. The popular story even goes so far as to record the dialogue between the two and is usually recounted as follows:

Satan says to Jesus: “I can destroy your Church.”
Jesus replies: “You can? Then go ahead and do so.”
Satan: “To do so, I need more time and more power.”
Jesus: “How much time? How much power?
Satan: “75 to 100 years, and a greater power over those who will give themselves over to my service.”
Jesus: “You have the time, you will have the power. Do with them what you will.”

The conversation is reminiscent of the prologue to the biblical Book of Job, in which Satan asks God for, and receives, permission to tempt the faith of the righteous Job. However, while the dialogue has become a central part of “popular legend,” there is no strong foundation in historical fact.

Whatever happened during Pope Leo’s vision, it appears certain that he did have a vision and what he saw was not pleasant. It prompted him to quickly compose the Prayer to St. Michael, and to request its use at the end of Low Masses. The pope lived during particularly turbulent times, and he believed prayer was needed to dispel the darkness that hung over the world. A longer prayer to St. Michael, sometimes known as the exorcism prayer although it was not intended for use in actual exorcism rituals, was approved by the pope 3 years later in two versions, one for clergy and one for lay individual prayer.

St. Michael the Archangel has always been known to be a powerful intercessor against evil, especially since he is recorded in the Book of Revelation as, “fighting against the dragon; and the dragon and his angels fought, but they were defeated and there was no longer any place for them in heaven” (Revelation 12:7-9). Based on this episode in scripture, St. Michael is frequently depicted in art thrusting a lance, spear or sword into Satan, who is often depicted as a serpent or dragon.

Ever since Pope Leo XIII composed it, the St. Michael Prayer has continued to be a staple of Catholic prayer and is a prayer many exorcists recommend to anyone who needs to combat the presence of evil in their lives.

Saint Michael Archangel,
defend us in battle,
be our protection against the wickedness and snares of the devil;
may God rebuke him, we humbly pray;
and do thou, O Prince of the heavenly host,
by the power of God, cast into hell
Satan and all the evil spirits
who prowl through the world seeking the ruin of souls.
Amen.

Read more:
5 Things you need to know about Archangels