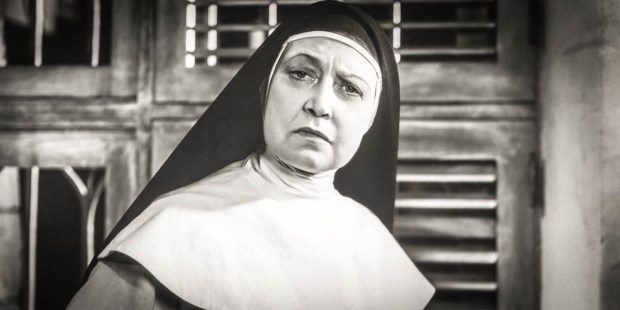 With so many sisters and nuns living lives of constructive service in the church, why can’t movies manage to feature them?

It looks so inviting doesn’t it, that shiny new Blu-ray sitting on the shelf at the store? Just look at that cover. All those fresh-faced nuns staring outward, sunbeams bursting forth from their beatific faces. And then there’s the name of the movie itself, The Little Hours. What good Catholic could possibly resist such a title? Ah, but you know how it goes. Eventually you have to open up the package, pop in the disc, and press play …

The Little Hours starts innocently enough with a medieval nun guiding a mule across a bucolic landscape. She reaches the abbey, where another sister badgers her over her seasonally inappropriate choice of habit. It’s mildly amusing. But then the two nuns are greeted by a passing stranger, and the pair respond with, “Hey, don’t you @#$%*^& talk to us! Get the @#$% out of here!” And that’s when the realization sinks in, you’ve been burned by Hollywood’s portrayal of nuns yet again.

To be fair, The Little Hours gives plenty of advance warning as to its contents. It states up front that its story is loosely based on Giovanni Boccaccio’s The Decameron, a 14th-century work that paints absolutely nobody, religious or otherwise, in a flattering light. So, as long as you attended one of the 0.001% of colleges that still assign The Decameron instead of whatever’s currently on Oprah’s Book Club list, then you know going in that The Little Hours is going to be full of vulgar, debauched characters.

By itself, that’s no big deal and easily ignored. But The Little Hours is hardly alone. Now, don’t worry, this isn’t going to be yet another pity party wherein I wail about how filmmakers rarely give us anything but negative portrayals of religious folk. Well, okay, maybe it is just a little. But more to the point is the fact that such portrayals seem to be escalating, if such a thing is possible. It’s grown to such levels of ridiculousness that even a bastion of secularity such as Vanity Fair recently felt compelled to declare “nuns behaving badly” as the most surprising cinematic trend of 2017.

Along with The Little Hours, this year has also seen the release of Novitiate, a movie that prolific film reviewer Sr. Helena Burns has deemed an inauthentic piece of trash. Set in a cloistered community during the years immediately following Vatican II, Novitiate follows the struggles of a young nun as she tries to navigate the changes happening in the Church during those turbulent times. Those struggles naturally include copious amounts of masturbation, lesbianism, and physical abuse. It’s pretty much what you would expect from a filmmaker whose only knowledge of nuns came from a tell-all memoir she ordered off Amazon.

Home viewers were treated to Netflix’s The Keepers, a true-crime documentary revolving around the tragic rape and murder of Sister Cathy Cesnik in 1969 Baltimore. Although police have dismissed any claims of cover-up due to zero evidence, the show explores the possibility that someone friendly to the Church had Sister Cathy murdered to prevent her from revealing the widespread abuse of teenage girls and nuns in the archdiocese. To support its theory, the series relies heavily on the testimony of two former nuns who claim to have recalled damning facts about the case after undergoing Recovered-Memory Therapy in the 1980s. Feel free to watch the show, do some research, and draw your own conclusions; just don’t go in expecting any glowing endorsement of the religious life.

Not released yet, but under production, is Paul Verhoeven’s Blessed Virgin. The director of Showgirls has based his next project on a biography of Sister Benedetta Carlini, published under the title Immodest Acts: The Life of a Lesbian Nun in Renaissance Italy. That sounds like a promising portrayal of orthodoxy, doesn’t it? In real life, Carlini ran afoul of the Vatican after claiming to be possessed by an angelic entity and molesting one of the nuns under her care. However, as of late, the disgraced abbess has become something of an icon to the more extreme segments of rather extremist communities, so it’s highly likely her character in the upcoming film will receive a much more sympathetic interpretation than that of crazy rapist.

Again, taken by themselves, none of these films are any big deal. Most of them bomb financially and quickly slip into obscurity. The overwhelming number of them, however, just gets irritating. Most of the nuns I’ve run across in my time as a Catholic have not been miserable deviants waging a war against the patriarchy, but you wouldn’t know that from what Hollywood spews out.

Part of the preponderance of bad nuns in movies has a practical reason, of course. It’s much more dramatic to have a story of someone struggling against their religion than it is to show characters happily going about their business serving others. And to be honest, such conflicts do happen in real life. But not to the extent we’re shown by the entertainment industry. It’s gotten so bad that the only positive portrayals of nuns in any kind of media this year that I can immediately recall come from either horror movies or that YouTube clip of a Miami nun chain-sawing trees after Hurricane Irma.

So, come on, Hollywood. No one is saying you can’t keep your bad nuns — it’s a free country. But couldn’t you at least throw an occasional bone to those of us familiar with how happy and wonderful most real-life sisters are? Is that really too much to ask?