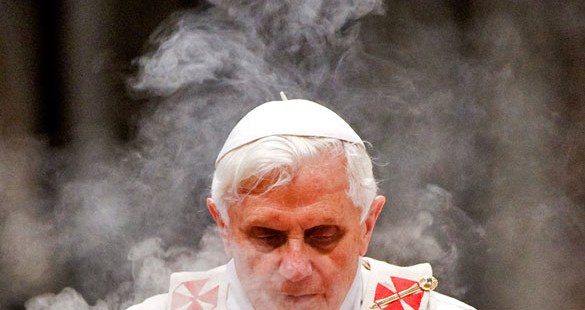 “There is an urgent need for every other possible thing, but the things of God don’t seem urgent.”

Pope Benedict XVI recently wrote the prologue to the Russian translation of Volume 11 of his Complete Works, which has just been published. In it, he reminds the reader of the priority of divine worship, citing a principle put forth by St. Benedict. This great saint, the pope’s namesake, laid out the first monastic rule in the Church, including many principles such as this one—“Let nothing be given more importance than divine worship”—which also apply to the life of the Church in general.

On September 25, Metropolitan Hilarion of Volokolamsk, president of the Department of External Church Relations of the Patriarchate of Moscow, was in Rome for an ecumenical meeting. He took advantage of the occasion to present Pope Francis and Pope Emeritus Benedict XVI a copy of Volume 11 of the Complete Works of Joseph Ratzinger, the tome collecting his writings on the Theology of the Liturgy. The work was translated and published in Russian by the Patriarchate of Moscow’s publishing house.

Benedict XVI affirms that “the essence of the liturgy in the East and the West is one and the same” despite the differences between them.

It was one of the messages he wished to convey in the prologue, for readers of the translation of the book. “And I hope that this book will also help Christians in Russia to understand in a new and better way the great gift that has been given us in the Holy Liturgy,” he wrote.

St. Benedict has been proposed by the Pope Emeritus as a teacher of the centrality of God in the life of man, which is more important than anything else that man does; thus, the liturgy is a “priority” in man’s relationship with God.

“In people’s minds today, things that relate to God, and therefore the liturgy, are not urgent. There is an urgent need for every other possible thing, but the things of God don’t seem urgent. Now, one could say that monastic life is, in any case, different from the life of men and women in the world, and that’s certainly true. Nonetheless, the priority that God should have, but which we have forgotten, is valid for everyone,” Benedict XVI explains.

“If God is no longer important, there is a change in our criteria for establishing what is important. Man, by pushing God into a corner, submits himself to limitations that make him a slave to the forces of matter which are opposed to his dignity.”

Benedict XVI writes that, after the Second Vatican Council, he became more aware once again of the priority of God and of the divine liturgy.

He speaks of a misinterpretation of the liturgical reform which has become widespread in the Catholic Church, and which led to giving pride of place to “the aspect of instruction and of one’s own activity and creativity.” This “has made people almost forget the presence of God,” he added.

“The deepest cause of the crisis that has caused turmoil in the Church is rooted in the obfuscation of the priority of God in the liturgy,” he lamented.

The publication of the translation is the result of cooperation among the Patriarchate of Moscow’s publishing house, the International Association “Sophia: Russian Idea, Idea of Europe,” the International “Sapientia et Scientia” Academy, Libreria Editrice Vaticana, and the Joseph Ratzinger–Benedict XVI Vatican Foundation, which curates the works of the Pope Emeritus.

The Metropolitan confirmed that, in the spring, a solemn presentation of the book will be organized at the Faculty of Theology of the Patriarchate. The translation project will continue with the Russian publication of Benedict’s trilogy on Jesus of Nazareth.