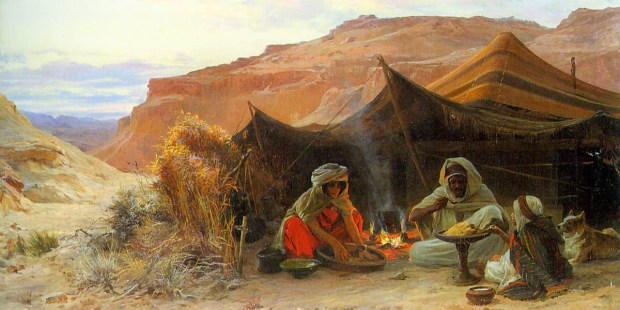 One summer when I was 8 years old, my family began a weeklong trek across the Arabian Desert. Living abroad was a substantial part of my early childhood. My dad’s career, which entailed a mix of foreign affairs, software programming, and project management, took us back and forth between the States and Saudi Arabia a few times, with a brief stint in Thailand as well. At the time of this journey, we were living in Jeddah, a city on the west coast of Saudi, and were on our way to visit friends living in Dammam, on the east coast.

It was a memorable trip.

I rode camels and learned what makes them spit. I watched my dad spend hours trying to figure out how to pitch a Bedouin-style tent. I listened to him try to convince my mom that no, the nearby herd of camels wouldn’t stampede while we were asleep. I watched shepherds herding goats and sheep. I climbed sand dunes and collected rose sandstone formations, and lay on the sand to watch the constellations at night. Life was good.

I also learned the meaning of a name.

We met numerous Bedouin tribes as we crossed the desert. After meeting a number of families from different tribes, I knew this:

Bedouins are known for their hospitality. They have a longstanding tradition of welcoming the stranger and tending to them. This involves providing them with food, drink and respite, and protecting them for the duration of their stay.

Strangers have been receiving such hospitality in the desert for millennia. It’s recorded in the Bible. Think of Abraham’s response to the “three visitors” who came to his tent: “’My Lord,’ he said, ‘if I find favor with you, please do not pass your servant by. Let me have a little water brought, and you can wash your feet and have a rest under the tree. Let me fetch a little bread and you can refresh yourselves before going further, now that you have come in your servant’s direction’” (Gen 18:3-5).

Interestingly, though, welcoming a stranger does NOT involve asking the guest his name. According to Bedouin etiquette, a host should not ask for his guest’s name, or the purpose of his visit, unless he stays longer than three days.

This tradition reflects the fact that knowing someone’s name is significant. A name isn’t only a functional reality – a way of indicating which person we are talking to, or about. It’s a relational reality.

Knowing someone’s name, in the context of right relationship, gives someone a certain claim to the other person. It verifies that a meaningful relationship exists. It allows one person to speak “in the name” of the other, relying on the other’s authority or credibility. It enables two parties to call on each other in times of need. Exchanging names implies rights and responsibilities on both sides.

Moses understood this. When he encountered God in the burning bush, the first thing he asked about was God’s name. He knew he would need to have a proven connection with God if the Israelites were to listen to him. By revealing the name Yahweh, the Lord granted him that security. Knowing God’s name gave Moses a way of reaching out to him and allowed Moses to credibly speak on his behalf. God established a personal relationship with Moses.

The connection between name and relationship goes back to the beginning of creation. The Lord created the birds and wild animals. “These he brought to the man to see what he would call them; each one was to bear the name the man would give it. The man gave names to all the cattle, all the birds of heaven and all the wild animals” (Gen 2:19-20). In Genesis 1, the Lord gave Adam and Eve dominion over the rest of creation. Naming someone is an act of authority. Adam named the animals because of the authority God gave them. Our parents name us because of their parental authority, likewise derived from God’s design for creation. When we choose to share our name with someone, we give that person a certain authority over us – by virtue of knowing our name, they are able to call upon us, thus becoming part of our reality.

The concept of being called by name also comes up in the Gospels. In speaking of the difference between true and false shepherds, Jesus tells us that when the true shepherd arrives, “he calls his own sheep by name and leads them out” (Jn 10:3). Once again, the concept of a name is linked with a gentle authority and points to the existence of a deeply personal relationship.

The Bedouins wait until the fourth day to ask a guest his name. Typically, guests leave by the third day. If their visit has a purpose, they will stay longer. On the fourth day, if a guest hasn’t departed, the Bedouins will ask his name and inquire into the nature of the visit.

The Bedouin gives his own name, however, from the beginning. From day one, the Bedouin has responsibilities toward the guest, and the guest can call upon the Bedouin for sustenance and protection.

Our trip was too short to stay with any individual Bedouin family for very long, so we never made it to day four, when our hosts would have been able to ask us our names in accordance with their rules of etiquette. (I’m pretty sure they heard our names anyway, as we used them with each other and maybe voluntarily offered them.)

But what I learned that summer gave me plenty to think about, even 20-some years later.

I have a name. It isn’t just something people call me by. It’s part of who I am. I have the ability to treasure it, share it, and at times, to withhold it. I have responsibilities because of my name. I have family and friends who know me by name. I have a God who has revealed his name to me, and who knows and calls me by name. And so do you.