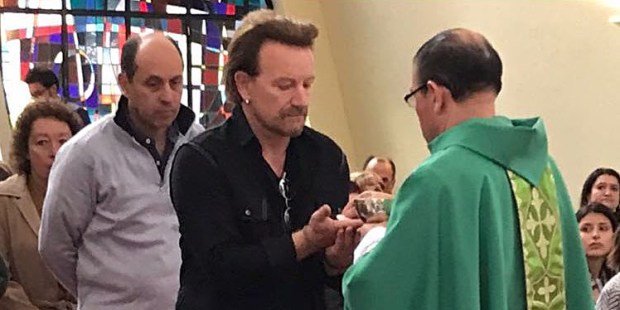 He came alone, prayed in silence, and received the Eucharist

Let’s imagine the scene. You are at Mass, in your home parish and right behind you, praying in silence is a famous celebrity. You are astonished, especially when that famous person rises and stands next to you in line for Communion.

This is what it felt like for the parishioners at noon mass at the Modern Gymnasium in Bogota. There, they suddenly met the vocalist of the historic band U2 who took a break in his busy day of touring in Colombia to attend a local parish Mass and receive the Holy Eucharist.

According to those attending Mass, Bono arrived alone. He stayed quietly in the back of the room, prayed in silence and received Communion. He was just one more parishioner who attended the Sunday Eucharist.

The Eucharist ended and Bono left as he had arrived, making no noise and with the apparent sole intention of feeling the presence of God.

It’s a surprise to meet someone famous at Mass. In Bono’s case the surprise may be more that he was in Bogota, Colombia, but not that he was at Mass. He himself has on numerous occasions given testimony of faith:

Read more:
WATCH: Are you getting as much out of the Psalms as Bono?

Read more:
Bono: “Listen to Pope Francis and It Will End Corruption and Hunger”

Read more:
Video: U2’s Bono Says Jesus Was Either the Son of God or A Nut Case