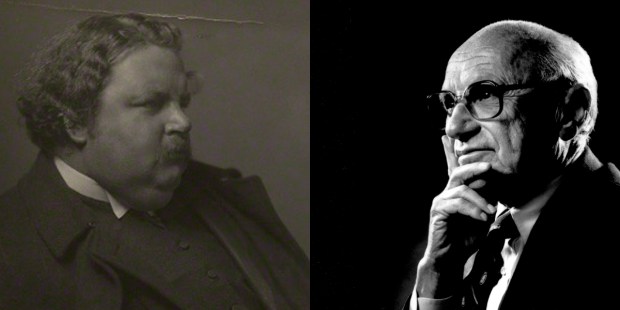 The following is an imagined dialogue between Nobel Laureate Milton Friedman (MF) and G.K. Chesterton (GKC) on the topic of the novel Robinson Crusoe and the essence of freedom. Passages in quotations are drawn from the works cited in parentheses.

Milton Friedman: “The virtue and desire for freedom is for what people can do with their freedom. Freedom is not an individual value, it’s a social value. Robinson Crusoe on an island … freedom is a meaningless concept to him.” (PBS, Free to Choose, part 10)

Gilbert K. Chesterton: “Robinson Crusoe … owes its eternal vivacity to the fact that it celebrates the poetry of limits, nay, even the wild romance of prudence. Crusoe is a man on a small rock with a few comforts just snatched from the sea: the best thing in the book is simply the list of things saved from the wreck.” (“Ethics of Elfland,” Orthodoxy)

MF: Excuse me, there isn’t much Crusoe can do on that island. He can certainly do more in Manhattan or Los Angeles, where the invisible hand of the marketplace is at work. What if Crusoe wants to send his kids to school? Does the desert island have various schools from which he can choose?

GKC: One might suggest he do the truly radical and desperate thing of raising his own children …

MF: What if Crusoe wants to eat? Think of all the choices he has in Manhattan: restaurants, supermarkets, grocery stores, and kitchen appliance stores. He has choices in civilization. If he wants to eat on the island he has to make his own food and for such purposes he has only the few kitchen tools that he saved from the wreck. On the deserted island Crusoe doesn’t have choices, only an inventory.

GKC: “The greatest of poems is an inventory. Every kitchen tool becomes ideal because Crusoe might have dropped it in the sea. It is a good exercise, in empty or ugly hours of the day, to look at anything, the coal-scuttle or the book-case, and think how happy one could be to have brought it out of the sinking ship on to the solitary island. But it is a better exercise still to remember how all things have had this hair-breadth escape: everything has been saved from a wreck.” (“Ethics of Elfland,” Orthodoxy)

MF: You have this backwards. Crusoe stands to learn from us, not the other way around. We have more choices and freedom than Crusoe. He resides on a desert island, and thankfully, we do not.

GKC: “But I really felt … as if all the order and number of things were the romantic remnant of Crusoe’s ship. That there are two sexes and one sun was like the fact that there were two guns and one axe. It was poignantly urgent that none should be lost; but somehow, it was rather fun that none could be added.” (“Ethics of Elfland,” Orthodoxy)

MF: It would be more fun if more could be added. Growth is good. We want invention and innovation. Freedom means choice. “Our real objective is not just jobs but productive jobs — jobs that will mean more goods and services to consume.” (Free to Choose: A Personal Statement)  The consumer with his many choices is truly free. Choice is the essence of freedom. Limitation is the opposite of freedom.

GKC: Limitation and freedom go together.

MF: Are you made free when limitations are imposed on you? If I am an absolute monarch and I say, “Thou shalt not do …” or “Thou shalt not say …”  am I making you freer?

GKC:  “…it is surely obvious that ‘Thou shalt not’ is only one of the necessary corollaries of ‘I will.’ ‘I will go to the Lord Mayor’s Show, and thou shalt not stop me.’ Anarchism adjures us to be bold creative artists, and care for no laws or limits. But it is impossible to be an artist and not care for laws and limits. Art is limitation; the essence of every picture is the frame.” (“The Suicide of Thought,” Orthodoxy)

MF: I am certainly no anarchist. I never have been. However, since you have brought up art, I’d like to make clear that I would not set limits on artists.

GKC:  Art sets limits on artists. “If you draw a giraffe, you must draw him with a long neck. If, in your bold creative way, you hold yourself free to draw a giraffe with a short neck, you will really find that you are not free to draw a giraffe. The moment you step into the world of facts, you step into a world of limits. You can free things from alien or accidental laws, but not from the laws of their own nature. You may, if you like, free a tiger from his bars; but do not free him from his stripes. Do not free a camel of the burden of his hump: you may be freeing him from being a camel.” (“The Suicide of Thought,” Orthodoxy)

GKC: But the collective is held by morality.

MF: I’m not sure I understand you. What do you mean?

GKC: It’s what I felt after reading Robinson Crusoe. “The trees and the planets seemed like things saved from the wreck … I felt economical about the stars as if they were sapphires … I hoarded the hills. For the universe is a single jewel, and while it is a natural cant to talk of a jewel as peerless and priceless, of this jewel it is literally true. This cosmos is indeed without peer and without price: for there cannot be another one.” (“Ethics of Elfland,” Orthodoxy)

GKC: And individuals are held by one universe. There is clearly an order to the universe. If such an order of things did not exist it would hardly be a universe, but a multi-verse. To depart from the order would be to disobey the order. Order in creation can only come from a creator. Don’t you think we ought to follow his order? If the author of existence gave an order? As a boy, the more I thought of Crusoe the more I felt “We owed, also, an obedience to whatever made us. And last, and strangest, there had come into my mind a vague and vast impression that in some way all good was a remnant to be stored and held sacred out of some primordial ruin. Man had saved his goods as Crusoe saved his goods: he had saved them from a wreck.” (“Ethics of Elfland,” Orthodoxy)