Teenage boys’ kindness to a homeless man is captured on CCTV 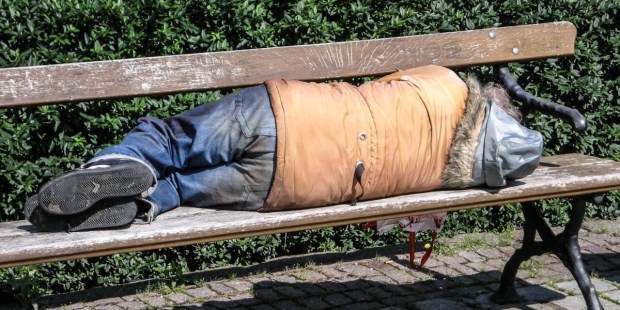 The grainy images of their generous act are being shared across the world.

When three teenage boys helped a homeless man last year, they had no idea anyone was watching. But thanks to the grainy images captured by CCTV cameras in Nysa, Poland, their good deed has been shared across the world.

The video shows the three boys carrying a blanket through the city streets, and carefully placing it on a homeless man lying on a park bench before they walk away.

This week the mayor of Nysa publicly thanked Szymon, Wojtek and Marcin for their thoughtful deed.

“That’s a big gesture. I bow to you. The world needs such gestures,” said Kordian Kolbiarz, Mayor of Nysa, according to TVN24.

Seventeen-year-old Szymon told the station that when they met the homeless man he was shivering in spite of the warm weather. The boy and his friends looked everywhere for a blanket, and when they’d almost given up hope of finding one they came across someone throwing out furniture, including a clean duvet and pillow.

“We took the quilt to this gentleman. We hugged him. Thank you very much. He smiled and went to sleep. I am convinced that it was worth doing, said Szymon.

“If someone asks for help, we should give him a hand,” he said.

At the reception with the mayor, Szymon made clear that he didn’t think that he and his friends were heroes.

“It was a typical human response to the needs of another man, nothing extraordinary,” he said.

According to the TVN24 report, the man the boys helped is no longer homeless. Whether the kindness the boys showed the man helped him turn his life around is not known (and not even the point). Their deed continues to reap good, inspiring many as their story is shared across the world.