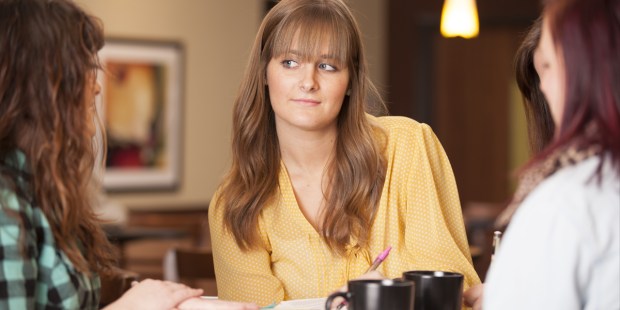 Those who speak in the name of the Church have a great responsibility. Catholic Voices is an international Catholic organization that offers a “group of articulate speakers who make the Catholic case in interviews and debates — clearly, reasonably, and compellingly.” Kathryn Jean Lopez and Austen Ivereigh, members of Catholic Voices USA, wrote How to Defend the Faith without Raising Your Voice, published by Our Sunday Visitor. Here are 10 principles they describe in the book for defending the faith effectively:

Instead of thinking about the arguments you are going to refute, think about the values behind those arguments. Afterwards, reflect on how you can start your reply by identifying with the values of the person you are debating. Look for the hidden ethical principle, often a hidden Christian value, behind the criticism. This has the effect of winning the other person’s good will, and allows you to engage in a more peaceful and considerate discussion. You aren’t a warrior in a cultural war of absolute values; you are someone who is bringing tolerance and wisdom to a controversial problem.

As people of faith, we want to shed light on difficult issues; the topics are already hot enough, without us getting hot under the collar. If you engage in a debate with the intent of bringing light instead of heat, the emphasis will be completely different. You will listen attentively to the other person’s opinion, no matter how much you disagree. Your goal will be to shine the light of truth on the issue, respecting the other person’s point of view while maintaining your own.

3. People won’t remember what you said as much as how you made them feel.

Intellectuals and theologians: beware! Showing off erudition is the opposite of communication, which uses simple words to explain complex ideas. The point isn’t for your arguments to be dazzling, but rather for your words to be understood. Evaluate your performance, after each debate, according to this criterion: Have I helped others to understand the teachings or positions of the Church better? How have I made them feel: encouraged, or defeated? Inspired, or harassed? Wanting to hear more, or relieved that it’s over?

We tend to prefer stories to lectures, and we pay more attention to experiences than to arguments. This doesn’t mean that we shouldn’t use arguments, but when you can, include metaphors, anecdotes about personal experiences, or hypothetical situations that help people to visualize what you want to say.

Debates can be very disorganized, sliding blindly downhill until we forget the main issue we were talking about. Be sure that what you say is concise, clear, and doesn’t leave anything important out. Simplify your ideas, reducing them to three arguments you want to make. As long as you can get to two of the three, you can be satisfied, but still, it’s important that you organize your ideas into three main arguments. Imagine them like a triangle. When you are talking, think about how the topic is related to that triangle, and let that be the starting point of your argument.

This is a basic principle of communication, and is even more important when we are defending the Church’s point of view. Jesus’ message is mind-blowing and inspiring. Being positive means leading the discussion towards the positive perspective that the Church offers people: the vast, marvelous possibilities of our freedom. The focus should be on saying “yes” to God, turning towards Him and all the good things He offers us; the “no” to sin and falsehood is a consequence, not the main message. Don’t sound like an angel of judgment; show people the luminous path to heaven.

Compassion is a characteristic that should distinguish Christians, but unfortunately, sometimes it’s absent in debates with Catholics. We feel like our most cherished values are being threatened, and sometimes we react harshly. But someone who criticizes us also has his or her own principles, and can also feel frustrated if those principles are not valued. We can end up in a vicious circle. Being compassionate, even in important and heated debates, is essential for breaking out of this vicious circle of mutual reproach. It’s very likely that the person you’re debating with has had a direct experience with the central point of the discussion, whether personally or as a first-hand witness. You may be aware that the person has had that experience, or you may not; if not, it’s better to assume it’s the case. Being compassionate means being able to understand other people’s anger and pain, and therefore being able to relate to others as one human being to another.

We have to start by preparing ourselves well and by having data that provide context for the discussion. But remember that statistics can feel abstract and inhuman, or can seem like a smokescreen; people often think that politicians who use statistics are lying or hiding something. Above all, try to keep the discussion from devolving into statistical ping-pong, a game that many people would pay to avoid. If you use statistics, don’t make them too complicated.

In order to communicate well, it’s essential that we put our egos to the side. The person you’re debating with doesn’t have a problem with you personally; he or she may even respect and appreciate you. They are taking issue with what you represent. Your fear, timidity, and defensiveness are products of your ego taking things personally. Think of St. John the Baptist, who was a fearless communicator: the source of his strength was the knowledge that he was the door through which people had to pass to reach Jesus Christ. Praying before going in front of people or starting a debate is of vital importance, not only to calm your nerves and set aside your ego, but also to help you remember why, and for whom, you are going to speak. Pray to the Holy Spirit, asking Him to be with you and to speak through you.

10. It’s about witnessing, not winning.

We know that sometimes the Catholic Faith can inspire difficult questions. However, we have to keep in mind that those difficult questions make people stop and think. Questions should be welcome! This can mean the beginning of a new way of looking at life. Or, on the contrary, it can make us abandon the path we are on and turn back—something Jesus warned us against. The enemy of witnessing is the desire to “win” and to “defeat” the person we are debating with. An attitude of rivalry and conquest, of winners and losers, of “us against them,” of “good and evil,” etc. is the language of battles and attacks, of war and persecution. It’s not a good way to convince people. Bringing someone to greater fullness of the faith is a “win-win” situation, where defeating an argument is less important than helping someone participate in the victory of drawing closer to God. We need to take advantage of the moment when people have not yet turned away, but are confused, indignant, or curious, so we can bear witness to how Jesus has been present in our life as Catholics. Whenever people challenge us, it’s an opportunity to be witnesses: to clear up misunderstandings, to shed the light of truth when there is confusion and misconception, and to show empathy and compassion along with a deeper understanding of the truth.