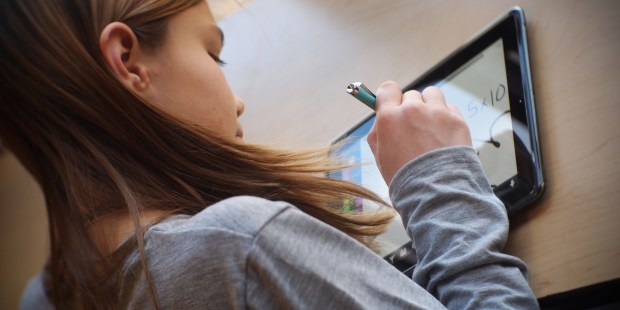 There is growing concern about children’s time spent on mobile devices.

Childhood use of mobile devices has skyrocketed in the past six years, a new report finds.

Common Sense Media has conducted a nationwide parent survey that found that 98 percent of homes with children 8 and under now have a mobile device, such as a tablet or smartphone. Just six years ago, that figure stood at 52 percent, National Public Radio reported.

The survey finds that 42 percent of young children now have their very own tablet device. That’s up from 7 percent four years ago and less than 1 percent in 2011. Nearly half of children 8 or under “often or sometimes” use screens in the hour before bedtime, which experts say is bad for sleep habits.

But it’s not just new media that are gaining traction in American homes, bringing potential difficulties. In many homes—42 percent—the television is on “always” or “most of the time,” whether anyone is watching or not. Research has shown this so-called “background TV” reduces parent-child interaction, which in turn can hurt language development, NPR said.

American schools are buying millions of electronic devices, and there are tens of thousands of apps meant to enhance learning for even the smallest babies, the radio network noted. But there are persistent concerns and warnings about how the use of such devices may be affecting young minds.

For example, though it examines teenagers and not the prepubescents that are the concern of the Common Sense survey, a forthcoming study in the journal Clinical Psychological Science shows that, after 2010, teens who spent more time on new media were more likely to report mental health issues than those who spent time on non-screen activities.

Jean Twenge, a professor of psychology at San Diego State University and author of the study, looks at how today’s super-connected teens may be less happy and less prepared for adulthood than past generations.