Actress Patricia Heaton made history Thursday at a New York dinner that has become an institution and has featured presidents, prime ministers and royalty.

Heaton, best known for her role in the TV sitcom Everybody Loves Raymond, became the first woman to emcee the Alfred E. Smith Memorial Foundation Dinner, which raises money for charity in the Archdiocese of New York.

Speaker of the House of Representatives Paul D. Ryan, R-Wis., was the keynote speaker for this year’s dinner, the 72nd to be held since its inception in 1945.

The white-tie dinner had to be moved this year from its longtime venue, the Waldorf-Astoria Hotel, which is closed for a three-year-long renovation, across town to the New York Hilton Midtown. Some 815 guests attended, paying upwards of $3000 a plate for Lobster and Black Radish Salad, Tournedo of Beef, and White Chocolate and Berries of the Forest Cake. The foundation raised close to $3.4 million this year—a new record for the most funds raised in a non-presidential election year.

The dinner had a slightly lower profile than last year’s event, which featured Donald J. Trump and Hillary R. Clinton, a night after their third debate and two weeks before Trump won the election. Since John F. Kennedy and Richard M. Nixon made a joint appearance at the 1960 dinner, it has been a tradition to invite both major candidates during a presidential election year.

It has also been a tradition for speakers to engage in good-natured jabs at their political opponents. But in 2016, it seemed that Donald Trump’s jabs were not so good-natured, and some of his comments regarding Hillary Clinton earned him boos and shouts from the audience. Many guests Thursday night recalled the awkward atmosphere, but several of this year’s speakers capitalized on the 2016 performance, working it into their material. John K. Castle, the evening’s honoree, confirmed that he has been to every dinner for the past 38 years and admitted that he had heard a lot of “bad jokes” over the years.

“Unfortunately, some of those bad jokes got elected,” he said, to applause.

When it was his turn, Ryan acknowledged that Trump’s 2016 dinner speech “offended some people.”

“I know his comments, according to critics, went too far,” he said. “Some said it was unbecoming of a public figure, and they said that his comments were offensive.

Ryan continued to riff on Trump’s legendary lack of humility and propensity to use Twitter. He said that during the presidential inaugural ceremonies in January, Cardinal Timothy Dolan, archbishop of New York, who presided at the Al Smith dinner, delivered an invocation invoking the “infallible, enlightened Supreme Being.”

“And President Trump stood up and took a bow,” Ryan quipped. “Actually, both presidents did.”

But Ryan, a Catholic who was Mitt Romney’s running mate in the 2012 race for the White House, got serious as he brought his speech—and the evening—to a close. Harking back to the legacy of Al Smith, the New York governor for whom the dinner is named, Ryan commented, “We can achieve so much to tackle poverty eye to eye, soul to soul, person to person. As Catholics, we call this solidarity and subsidiarity.”

He referred to recent natural and manmade tragedies that have struck various parts of the nation, such as hurricanes, wildfires, and the Las Vegas mass shooting, and said, “We need to be thinking about other citizens. … Much has been taken, but not our spirit, not our nation’s resilience, not our faith.”

Noticeably missing from this year’s dinner was the raspy voice and quick wit of the dinner’s long-time emcee, Alfred E. Smith IV, great-grandson of  Gov. Al Smith. According to a New York Post article in February, Smith was pushed out of the foundation over a dispute with Cardinal Dolan over control of the funds raised by the dinner.

But New York Archdiocese spokesman Joseph Zwilling denied that there was any such tension, saying that shortly after last year’s dinner Smith told the foundation that after 35 years in the position he felt it was “time for somebody else to take up the reins.”

“We miss him,” Zwilling said.

Smith’s great-grandfather, a Democrat, was the first Catholic nominee for president for a major political party. He lost to Herbert Hoover in 1928.

In her introductory remarks, Heaton made much of the fact both that she is a Catholic and that she was breaking a “glass ceiling” at the charity dinner. Noting that she was wearing a dress that could be considered “cardinal red,” she advised Cardinal Dolan that he’d better “watch your back.” 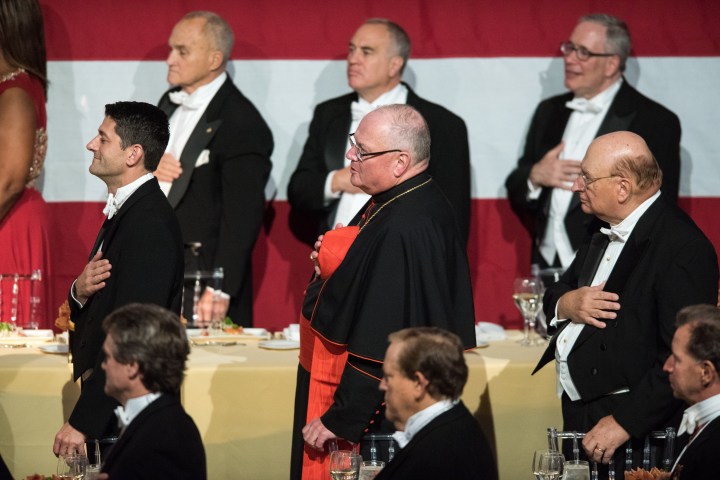