Pope and astronauts chat about hopes of humanity 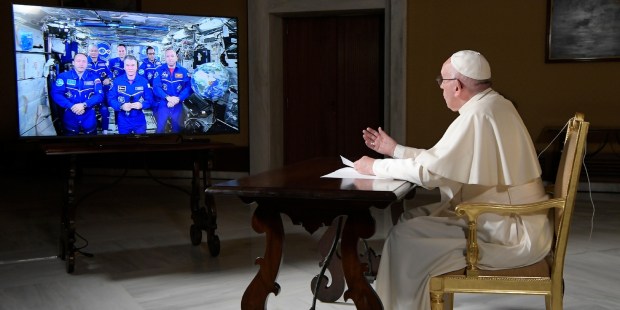 Science and faith share the same goal of seeking the truth.

Today, Pope Francis connected via satellite link with the crew of the International Space Station (ISS). The pontiff engaged in a conversation with the six astronauts currently orbiting in space, discussing the need for roots, and the hope present in every man.

The conversation took place in the form of five questions asked by the pope, and the astronauts’ replies. Gathered together in one compartment, the astronauts all answered, with the help of translations by the Italian astronaut Paolo Nespoli. The sound quality of the communications was good overall, despite a small problem with the reception on board the station. The exchange lasted for about 23 minutes.

Pope Francis was particularly appreciative of the answers to his question about the reasons why they chose their job, and the joys it brings them.

One Russian cosmonaut explained that he was following in the footsteps of his grandfather, who was an engineer for the Sputnik satellite. On his part, an American astronaut said his greatest joy is “to look outside every day and see God’s creation — maybe a little bit from his perspective.” These answers, the pontiff exclaimed, characterize well the universal need of human beings to have roots and hope.

Another of the Successor of Peter’s questions was what they thought was the meaning of the great Italian Renaissance poet Dante’s phrase, “Love is the force that moves the universe.”

Russian cosmonaut Aleksandr Miskrin answered by referring to a book that he brought to space with him: The Little Prince, by Antoine de Saint-Exupéry. He said that the book has helped him to understand that “love is the force that gives you strength to give your life for someone else.”

“That’s true!” said the Pontiff, admiring the fact that Russians carry that truth in their “blood and in their humanistic and religious tradition.”

On his part, the Italian astronaut Paolo Nespoli emphasized that he is “a technician, an engineer.” He hoped that soon theologians, philosophers, and even poets, could share that view of the planet from space, “in order to explore what it means to be human.”

Six astronauts are currently on board the ISS: three Americans, two Russians, and one Italian. All are Christians, and three—two Americans and the Italian—are Catholic.

On May 21, 2011, Pope Benedict XVI also spoke with the crew on board the ISS at the time. It was the first time there was a communications link between a successor of Peter and a space station.

“The future of humanity”

After the pope’s dialogue with the station at 250 miles of altitude, Roberto Battiston, president of the Italian Space Agency, and Josef Aschbacher, program director at the European Space Agency, answered questions from the press. According to them, the pope was “very happy” with this exchange.

The astronauts, they continued, represent all of humanity, in its diversity of nations and beliefs, but also in its capacity for international collaboration. It is therefore necessary that the world leaders “who guide the world,” including the Supreme Pontiff, be able to follow concretely the progress of this project which illustrates “the future of humanity.”

Especially because science and faith, they both insisted, are not opposed, but on the contrary, share the same goal of seeking the truth.