The Jewish plumber who interrupted a 20,000-person Nazi rally in NYC 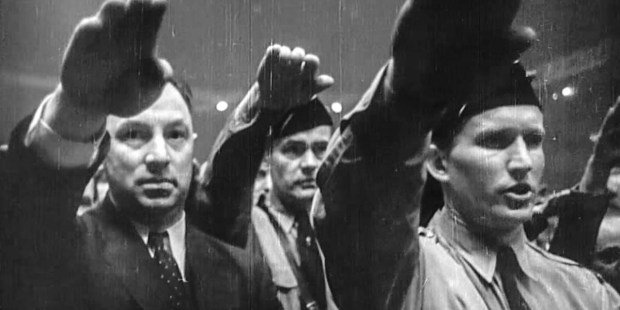 A recently released film A Night at the Garden shows chilling footage of the crowd with arms raised in a Nazi salute to the evening’s speaker, the leader of the German American Bund, Fritz Kuhn.

Kuhn begins by telling the crowd, “You all have heard of me,” he said, “Through the Jewish-controlled press: a creature with horns, a cloven hoof, and a long tail.”

“If you ask what we are actively fighting for under our charter: first, a socially just, white, Gentile-ruled United States. Second, Gentile-controlled labor unions, free from Jewish Moscow-directed domination,” he continued.

At that point (3:51 into the seven-minute film), a man is seen rushing the stage to be attacked and savagely beaten by about a dozen uniformed storm troopers while the audience erupts in frenzied shouting. That man, according to Philip Bump, reporting in The Washington Post, was Isadore Greenbaum, a 26-year-old Jewish plumber’s helper from Brooklyn.

Greenbaum, who had sneaked into the rally, charged at Kuhn, yelling “Down with Hitler!”

After being dragged off the stage by the police, Greenbaum was fined $25 for disorderly conduct. The New York Times reported the young man’s exchange with the judge at his sentencing:

“I went down to the Garden without any intention of interrupting,” Greenbaum said, “but being that they talked so much against my religion and there was so much persecution I lost my head and I felt it was my duty to talk.”

“Don’t you realize that innocent people might have been killed?” the judge asked.

“Do you realize that plenty of Jewish people might be killed with their persecution up there?” Greenbaum replied.

Two years later, when the United States had entered the war, Greenbaum enlisted in the U.S. Navy, first serving as deck engineer and later as chief petty officer. As for Kuhn, in December of that year he was arrested for embezzlement and deported.

Greenbaum and his wife later moved to Southern California, where he became well known as a fisherman on the Newport Pier who “kept up kept up a 30-year tradition of making ‘monuments’ at Newport Pier out of newspaper clippings, Bible verses and American flags,” according to the Post. He died in 1997, and was memorialized in this local news report.