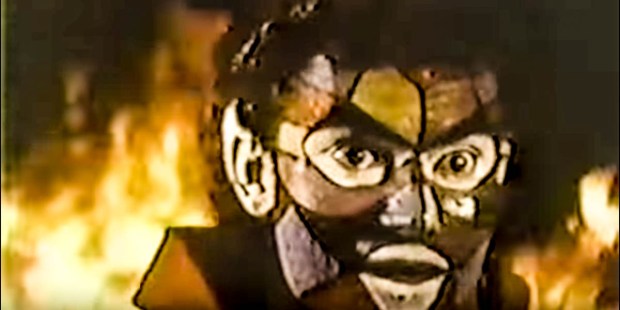 He sounds like a character out of Flannery O’Connor, but grown men wept upon his Evangelical altars.

As noted last week, faith-based production companies like Pure Flix typically try to counter-program Hollywood’s Halloween horror-thons with less frightful fare such as Same Kind of Different as Me. It wasn’t always that way, though. Not too long ago, Christian filmmakers regularly did their very best to scare the literal hell out of viewers. None more so than the Reverend Estus W. Pirkle.

An old-school fire and brimstone evangelical, Pirkle believed film could be a potent tool in winning souls to Christ. To that effect, he partnered with Ron Ormond, the prolific B-movie auteur behind such dubious titles as Mesa of Lost Women and The Monster and the Stripper. Having experienced two life-changing brushes with death just before meeting Pirkle, Ormond had vowed never again to make bad-low budget exploitation films. Instead, with Pirkle’s guidance, he would make bad low-budget CHRISTIAN exploitation films.

The pair’s first effort was 1971’s If Footmen Tire You, What Will Horses Do? This dystopian fantasy, penned by Pirkle, imagined life for Christians in a United States under communist rule. Filled with images of martyrs being tortured and murdered, the movie was an immediate hit in the small rural churches in which it was shown. But how to follow it up? What could possibly be scarier than the red menace? Why, Hell itself, of course.

Released in 1974, The Burning Hell follows the tragic tale of aging hippies Tim and Ken. We first meet the doomed duo as they are telling the Reverend Pirkle about their new church, the one with a preacher who doesn’t fill his sermons with all that depressing blather about Hell the way Pirkle does.

Alas, upon leaving the reverend’s office, Tim (played by Ormond himself) immediately crashes his motorcycle and is decapitated. Leaving Tim’s headless corpse by the side of the road, the grief-stricken Ken returns to Pirkle’s church. He arrives just in time to catch a sermon detailing stories from the Bible in which various reprobates are cast into the fiery pit of Gehenna.

The reverend sadly informs Ken that, like all those sinners from the Bible, the unrepentant Tim is most assuredly burning in Hell while tormenting worms devour his flesh for all eternity. Pirkle seems really, really concerned with the worms for some reason, mentioning them several times over the course of the film. The story ends with a forlorn Ken facing an altar, torn between his doubts about Hell and his desire to avoid eternal damnation. What will he choose?

By most cinematic standards, The Burning Hell is a terrible film. Its effects are bargain basement, highlighted by a Satan in red cape and clown make-up. The only real actor is Ormond, and he’s killed off in the first reel. Every other role is filled by a member of Pirkle’s own decidedly non-professional congregation. The highlight is a King Herod who speaks with a thick Mississippi drawl and pronounces every word phonetically. Who knew the name of the high priest of the Sanhedrin was pronounced Kay-eye-foos?

Watching the movie today, it’s nearly impossible to believe it could ever have produced any effect other than gape-mouthed bewilderment. The Burning Hell was released in a different time and place, however. As a child, I witnessed the film’s impact firsthand while visiting a friend’s small Southern Baptist church. That Sunday morning, the preacher skipped his sermon and started a projector instead. By the time the lights were raised, grown men were sobbing at the altar, begging to be saved from the flames and the worms and all the other horrors The Burning Hell had depicted.

Why was the film so effective? In his book Danse Macabre, Stephen King notes that a work of horror functions on two levels. “On top is the gross-out level … [which] can be done with varying degrees of artistic finesse … But on another, more potent level, the work of horror is really a dance — a moving, rhythmic search. And what it’s looking for is the place where you, the viewer or reader, live at your most primitive level.”

As far as the gross-out goes, The Burning Hell is an obvious no-brainer. It’s full of beheadings, slit throats, singed flesh, wailing and gnashing of teeth, and spears in the gut. Oh, and the worms, don’t forget the tormenting worms! The “degree of artistic finesse” in the violent imagery is arguable, but there’s no denying the film effectively illustrates the Dante-esque Hell it wants the viewer to accept as real. But as King notes, the gross-out only gets you so far. It can provide a momentary shock to the senses, but it rarely provides a meaningful or lasting impression.

Where The Burning Hell ultimately succeeds (at least by its poverty row standards) is in its application of King’s second criteria, in finding a place where the viewers live at their most primitive level. For the most part, people have a basic desire to live a happy life. And if they’re religious, they want to live happily ever after as well. Hell, whether it’s a literal burning pit or, as the Catechism describes it, some other “state of definitive self-exclusion from communion with God,” is the polar opposite of living happily ever after. For all its many shortcomings, The Burning Hell gets that exactly right.

You can easily find copies of The Burning Hell at places like YouTube to watch for Halloween. Because it’s a product of its time and setting, however, the film is unlikely to frighten anyone viewing it today. Its core concept remains solid, though. A life without God, especially an eternal one, is a horrifying idea. In this era where the very notion of Hell is often scoffed at, wouldn’t it be interesting to see if a modern faith-based movie company like Pure Flix could produce a movie as viscerally effective in communicating that message as Pirkle’s did in its day?