Millennial parenting: It’s the opposite of the way they were raised 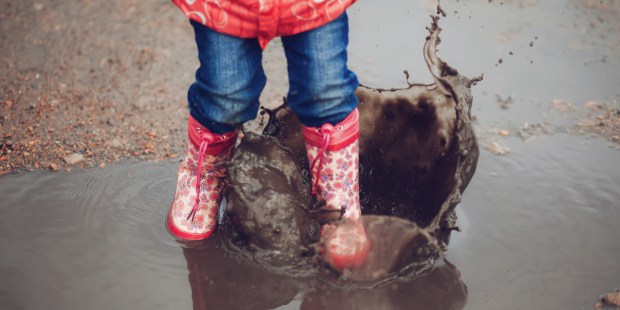 About 30 years ago, germs were scary but blankets weren’t.

When I was a baby, America was fighting a war on germs. My parents spent hours sterilizing bottles and washing our hands and physically restraining us from licking the floor, the furniture, or each other. We never ate food we dropped on the floor and we cleaned everything with antibacterial spray. Even then, it wasn’t enough. A local news program once ran a segment wherein a scientist tested the surfaces of a gleaming kitchen that had been painstakingly disinfected and found bacteria everywhere. I vividly remember the impression it made on my parents, who eschewed sponges for years afterward.

Back then, we had never heard of antibiotic resistance or probiotics. No one knew what a microbiome was or that there were good bacteria. Babies were protected from germs as vigilantly as they were protected from everything. We were put to sleep on our stomachs, to protect us from choking if we spit up during the night. We slept in soft cribs with thick padded bumpers, heavy blankets, and cozy stuffed animals. No one knew what SIDS was, only that babies sometimes died at night. The only thing parents knew to do was pray it didn’t happen to their baby.

Now, those babies of the 80s and 90s are having their own babies, and all the official wisdom on baby-rearing has been directly reversed. The New York Times recently featured an article by Paula Span, ruminating on the difference between the way her generation raised their children and the way their children are doing it.

I saw this generational divide recently when my daughter and son-in-law traveled out to my New Jersey town for a museum event. They were bringing Bartola, so I invited a few local friends to come meet her.

“Are they bringing a portable playpen?” one asked.

Nah, I said, she’ll just crawl around on the floor.

“The floor? The filthy floor?” You’d have thought we were going to plop her down on a subway platform. But that was my parenting generation, when germs were scary but blankets weren’t.

My parents and I always joke that my children are feral because they play in the dirt a lot, rarely wear shoes, and have no problem eating food they dropped on the floor. I can’t remember every sterilizing anything, and my children sometimes make comments about the way rocks taste differently in the backyard than the front yard.

I tell them not to eat rocks, of course, because rocks aren’t food and they might choke. But I don’t worry about germs. I do, however, worry about SIDS. My babies slept on their backs in austere cribs with hard mattresses, or they slept next to me in a co-sleeper bassinet. I woke up 1,000 times a night to put my hand on their chests and make sure they were breathing, and when they reached a year old I breathed a sigh of relief that the threat of SIDS had passed.

It’s tempting to look back on the way our parents did things and shake our heads, thinking we’re wiser than they were because we have more information. But we’re not wiser — we just have more information. I have no doubt that when my kids are having kids they’ll be rightly horrified by some universal millennial parenting practice that turned out to be detrimental to our children’s health, and we’ll wish we had known better back then.

In the meantime, we’re loving and protecting our kids in the best way we know how. Just like our parents did for us.

Read more:
A millennial male reveals what he thinks of masculinity

Read more:
What millennials can teach us about raising kids

Read more:
How to Stop Being Busy