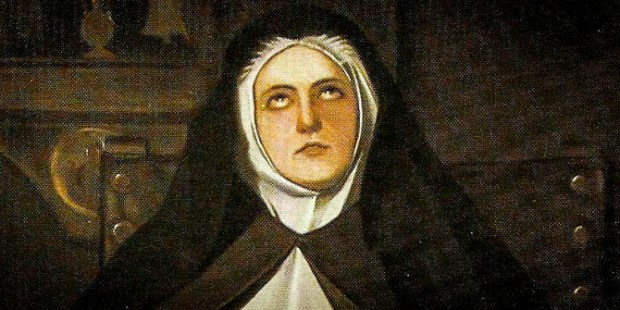 Venerable Mary Magdalen Bentivoglio (1834-1905) was born Annetta, an ordinary little girl—or as ordinary as one can be with 15 siblings and a father who’s a count. The Bentivoglios were a pious clan, but piety doesn’t (and shouldn’t) erase our personalities, and despite her charmed childhood, Annetta was no plaster saint. She loved the Lord from a young age, longing to become a martyr, but she also loved mischief and was famously stubborn. Her stubbornness, as it turns out, was just the quality she needed to walk the path the Lord would set before her.

At first, Annetta’s life seemed that of a typical storybook saint: when she lost her parents as a young adult, the pope himself took responsibility for her. He sent her to a monastery, where she discovered a vocation to cloistered religious life. Not long after, Annetta became Sister Mary Magdalen, a Poor Clare nun. As far as anyone knew, that would be the end of the story. She would pray and obey until she died, meek and holy to the end.

But God had other plans for his stubborn little saint-in-the-making. For 10 years, Sr. Mary Magdalen sought to mortify her will, fully embracing the rule of St. Clare and living a daily martyrdom. In 1875, however, a Franciscan Sister from Minnesota arrived looking for nuns to join her in America, lending their prayers as contemplatives to the work she was doing.

Pope Pius IX chose Sr. Mary Magdalen and her blood sister, Sr. Maria Constanza, to make the trip. After a month at sea, they arrived in New York only to be told by the priest accompanying them not to continue to Minnesota yet. Lost in a new country where they didn’t speak the language, they were befriended by Servant of God Isaac Hecker.

Fr. Hecker had a plan for the sisters, a home, and a school where they would teach poor girls. It would have been perfect but for the fact that these weren’t active sisters who served the poor and needy. These were nuns, cloistered women who served by their prayers, not by direct service. Sr. Mary Magdalen was stubbornly obedient to her vows and to God and awaited further direction.

After nine months (and 10 unanswered letters), a message finally arrived. The Minister General of the Franciscan order suggested that the penniless sisters travel around our enormous country looking for a bishop who wanted them. Sr. Mary Magdalen approached the archbishop of New York, offering to start a foundation of contemplatives in his diocese. To her shock, she was informed that such an order was incompatible with the American way of life. Cincinnati felt the same way, as did Philadelphia.

Everywhere the sisters went they found themselves accepted only on condition that they change, that they turn their backs on the call they’d received in order to be “useful.” New Orleans seemed promising until their superiors told them to move further north. A community was begun in Cleveland but they were asked once again to violate their rule of life. Off to Omaha they went, there finally to put down roots in a city that understood the value of their way of life and the power of their prayers. Once, the young community was asked to pray for a couple to have a baby; some months later, a telegram arrived: “Twins born! Call off the Poor Clares!”

Mother Mary Magdalen (the abbess of the community) was able to settle down at last, but still the Lord called; she knew she was being asked not just to be a cloistered nun but to begin more foundations of nuns. This she did, in New Orleans and then in Evansville, Indiana, all the while enduring cold, hunger, and persecutions from within the community and without.

One nun in the Omaha community took it upon herself to be the instrument of martyrdom in Mother Mary Magdalen’s life, accusing her and her blood sister of such serious failings that they were made to leave their convent, barred from the Sacraments, and even investigated by the Vatican before finally being cleared. All the while, Mother Mary Magdalen managed to smile, even to laugh; “All my life I have asked God for crosses,” she said, “and now that He has sent them, why should I not be glad?”

Thirty years after she arrived in America, Mother Mary Magdalen went home to God. She had spent 30 years suffering, being ignored, persecuted, rejected, and misunderstood. But through it all, she remained faithful. Grace had transformed her youthful stubbornness into dedication, dedication to her vows and to her superiors. After years of struggle, Mother Mary Magdalen ultimately found herself made a saint by the very attribute she found most frustrating.

Let’s ask her intercession that God would transform even our baser characteristics into paths to holiness. Venerable Mary Magdalen Bentivoglio, pray for us!