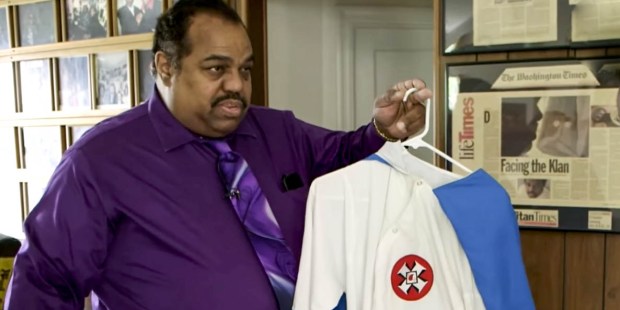 Daryl Davis collects robes of former Klansmen whom he convinced to quit the group.

The imperial wizard is the top national leader of the Ku Klux Klan. That position was once held by a man by the name of Roger Kelly.

One would assume that such a man would be completely dedicated to the ideals of the organization that strives for white supremacy in the United States. Perhaps he was. But when a fellow by the name of Daryl Davis came into his life, he began to have second thoughts.

And Davis is African-American.

Kelly, who had previously been the grand dragon in Maryland, resigned from the Klan in 1999, one of about 200 Klansmen who have “converted,” according to Davis.

In each case, Davis asked the same question: “How can you hate me if you don’t know me?” It’s become Davis’ mission to get to know—and be known by—Klansmen and other white supremacists.

He tells the story in the book Klan-Destine Relationships, and is the subject of a documentary called Accidental Courtesy.

Davis did not set out to be a missionary to the Klan. He’s a blues musician, and as the only black member of a band playing at a truck stop lounge in 1983, he was surprised during a break to be treated to a drink and some friendly conversation by a man who said he was a member of the KKK.

“This is the first time I ever heard a black man play piano like Jerry Lee Lewis,” the man said, as recounted by Davis in an op-ed in the Washington Post.

I told him that Lewis was a friend of mine and that he had learned his style from watching and listening to black blues and boogie-woogie pianists. My new fan didn’t buy it, but he did want to buy me a drink. While we sipped, he clinked my glass and said, “This is the first time I ever sat down and had a drink with a black man.”

“Sitting in that lounge with my new friend, I decided to figure it out in the only way that made sense: By getting to know those who felt hostility toward black people without ever having known any,” Davis recollected.

He persuaded the man to put him in touch with Kelly, then the leader of the Klan in Maryland, and the first meeting, though tense, at least broke the ice. Their dialogue continued over the years.

“He would visit me in my home, and I would eventually be a guest in his,” Davis wrote. “We would share many meals together, even though he thought I was inferior.”

When Kelly resigned as head of the 13-state Invincible Empire, he told Davis he could no longer hate people, Davis wrote. “I had not turned out to be what he had always thought of black people.”

The Southern Poverty Law Center, which keeps a database of “hate groups” in the United States, estimates that there are between 5,000 and 8,000 Klan members, split among dozens of different organizations that use the Klan name.

Davis would go on to meet with and get to know many more Klansmen and other supremacists. He has a collection of robes and other paraphernalia owned by members who have quit the Klan.

Incredibly, in the wake of the violent clash in Charlottesville, North Carolina, this summer, he was invited by the leaders of the Tennessee and Kentucky chapters of a branch of the Klan to speak at their national “Konvocation.” Davis went and spoke and took audience questions from the gathering. “Whether or not anyone there immediately changed their minds, we talked as people—and we all benefited from that,” he wrote.

Dialogue, Davis has come to appreciate, is indispensable. “I’ve seen firsthand that when two enemies are talking, they are not fighting,” he wrote. “They may be yelling and beating their fists on the table, but at least they are talking. Violence happens only when talking has stopped.”