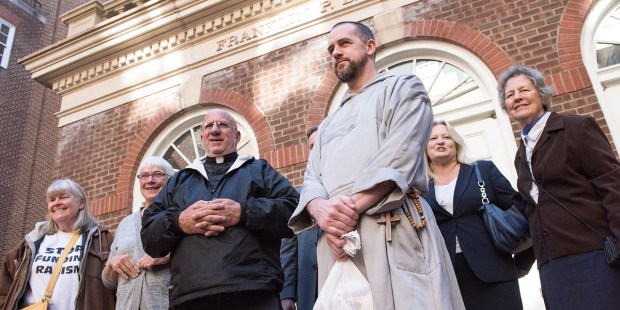 Two priests, a mother who has a long history of anti-abortion protests, and three other defendants were found guilty of trespass Monday for a Sept. 15 incident at an abortion clinic in Alexandria, Va., and given $500 fines.

If the defendants remain “of good behavior” for a year, Judge Donald Paddock will dismiss the charges, said Christopher I. Kachouroff, a Virginia attorney who represented the defendants.

But in a statement before the trial Nov. 20 in General District Court in Alexandria, Va., one of the defendants, Fr. Fidelis Moscinski, of the New York-based Community of Franciscan Friars of the Renewal, hinted that they would repeat the action that brought him to court that day.

“The defendants recognize that this Court seeks to pursue its function according to right reason, scientific truth, and legal coherence,” the statement read. “Therefor, they expect all charges to be dismissed and themselves to be immediately released so that they can return to the life-saving activities which first brought them to this Court’s attention.”

The defendants had also been charged with obstruction of justice but were found guilty only of trespass.

In addition to Fr. Moscinski, longtime anti-abortion activist Joan Andrews Bell; Fr. Stephen Imbaratto, a priest of the Archdiocese of Santa Fe, N.M., and a member of Priests for Life; Joan McKee; Julia Haag, and Bonnie Borel-Donohue were arrested Sept. 15 for praying and handing out roses at Alexandria Women’s Health Clinic. The action was part of a mission called the Red Rose Rescue, inspired by Canadian pro-life activist Mary Wagner, who has spent much time in jail for her activism. Wagner was present at the trial.

The procedure involves simply offering a red rose to any woman who appears to be entering a clinic for an abortion and trying to convince her to change her mind. But the Sept. 15 action at the Alexandria clinic suggested that the movement is reviving some of the tactics used during the Operation Rescue movement of the 1980s and 1990s, when activists blocked the entrances to clinic and made it as difficult as possible for authorities to remove them.

According to LifeSiteNews, the six pro-lifers arrested at the Virginia abortion facility passively resisted arrest, said a spokesman for the group, Larry Cirignano

The police took the four women out in wheelchairs and dragged out the two priests, he said.

The pro-lifers went into the Virginia abortion facility at 8:30 a.m. and were arrested by 10 a.m. It’s expected they will be released in about two hours, Cirignano said.

There were 10 women in the abortion center’s waiting room, he said.

Fr. Moscinski said in a statement Monday that he believes the court “committed a serious error” in finding him guilty.

“I, and the other defendants in this case, were justified in our attempts to save the lives of pre-born children who were in imminent danger of death through abortion,” he said. “A unique human individual begins to exist at the moment of conception.”

The priest said that abortion is “murder” and that “no law or court decision can make legitimate what is intrinsically evil.”

“In finding me guilty this Court has refused to recognize the humanity and value of pre-born children,” the statement continued.

In the earlier statement, Moscinski argued that the Red Rose Rescue was undertaken “in defense of human lives in imminent danger of death” and was “legally justified.”

“According to scientific, medical consensus elective abortion (whether surgical or chemical) destroys the life of a unique human being before birth,” the statement said. “This act is a grave attack upon the fundamental right to life of a pre-born child.”

The statement explained that the defendants were “trying to save the lives of pre-bornchildren who were scheduled for execution on that day. The defendants sought to achieve this end by peacefully trying to persuade the mothers and fathers of these children not to have them aborted but rather allow  them to be born. Practical help and life-affirming alternatives were offered to the clients in the waiting room.”

There were also Red Rose Rescues on Sept. 15 at a clinic in Sterling Heights, Mich., where four activists were arrested, and at one in Albuquerqe, N.M., where the two activists avoided arrest by complying with authorities’ directives.