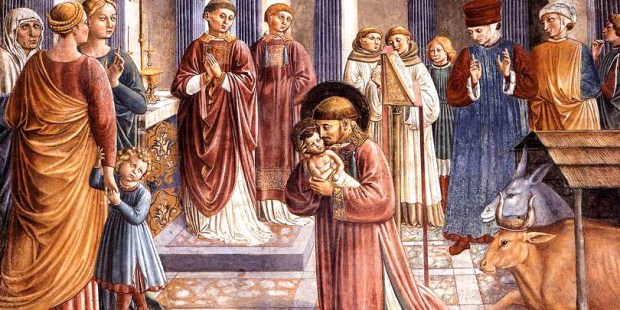 After visiting Bethlehem, Francis wanted to imitate the humble setting of Christ’s birth.

In 1221, St. Francis had a novel idea. To celebrate the birth of Jesus, Francis wanted to recreate the experience of the first Christmas. He did this not with statues inside a church, but with animals in a humble hilltop grove.

Francis’ inspiration came after traveling to the Holy Land and seeing the exact site of Christ’s birth. The poverty of it all deeply impacted Francis and was a particular element that he wanted to celebrate on Christmas.

Franciscan friar Thomas of Celano narrates the rest of the story.

[A]bout 15 days before the Nativity of the Lord, [Francis] said to [a friend in Greccio], “… For I would make memorial of that Child who was born in Bethlehem, and in some sort behold with bodily eyes His infant hardships; how He lay in a manger on the hay, with the ox and the ass standing by.”

There Simplicity was honored, Poverty exalted, Humility commended; and of Greccio there was made as it were a new Bethlehem. The night was lit up as the day, and was delightful to men and beasts … [Francis] stood before the manger, full of sighs, overcome with tenderness and filled with wondrous joy. The solemnities of Mass were celebrated over the manger, and the priest enjoyed a new consolation.

According to St. Bonaventure, a miracle also occurred on that night and someone noticed St. Francis holding the Christ Child.

A certain valiant and veracious soldier … affirmed that he beheld an Infant marvellously beautiful, sleeping in the manger, Whom the blessed Father Francis embraced with both his arms, as if he would awake Him from sleep.

The scene was powerful for all present and emphasized the poverty into which Christ was born. It was truly “Franciscan” in every sense of the word.

The idea caught on quickly. and in 1291 the first Franciscan pope (Nicholas IV) commissioned statues to create the first permanent Nativity scene in the Roman Basilica of St. Mary Major. Ever since, Nativity scenes in all shapes and sizes have been created throughout the world and they are one of the most popular Christmas traditions.