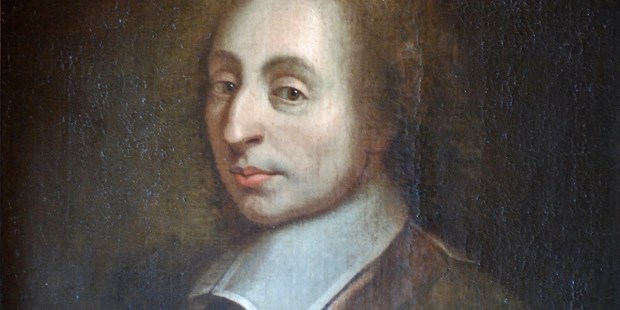 Nicolás Gómez Dávila once wrote: “Scholasticism sinned when it tried to turn the Christian believer into a know-it-all. The true Christian believer is a skeptic who trusts in Christ.” (Escolios a un texto implícito, § 1299). It is debatable whether this general description applies to every Christian, but it seems to perfectly fit the religious thought of Blaise Pascal, a scientific-minded prodigy with a complicated relationship with religion. Although never an atheist, his attitude toward religion was marked by recurring doubts and, at times, plain indifference.

He came to truly care about Catholicism by chance. In 1646, his father had an accident that left him stranded on a bed for three months and, because of this, Pascal ended up meeting Doctor Deslandes and Doctor de La Bouteillerie who, apart from being his father’s physicians, were followers of Jansenism—after Cornelius Jansen, Bishop of Ypres, whose work on Augustine and the Church Fathers is taken as the origin of the movement. This still fairly small sect, espousing a rigorous Augustinism similar to that of the Dutch Calvinists, was at the time gaining a lot of followers among French Catholics. Pascal spoke with the doctors frequently, borrowed from them works by Jansenist authors, and began writing on theological subjects. However, he fell away from this initial religious engagement and, for a while, pursued the life of a worldly bachelor. That is, until the night of 23 November 1654, when he had an intense religious experience. “Fire. God of Abraham, God of Isaac, God of Jacob, not of the philosophers and the scholars…”, began the brief note to himself in which he immediately recorded the experience, the note then ended quoting Psalm 119:16: “I will not forget thy word. Amen.”

After this intense experience, his faith and religious commitment were rekindled and he began to write, again, on religious and theological subjects. His most influential theological work was published posthumously as the Pensées (“Thoughts”). This unfinished work was meant to have been a sustained and coherent examination and defense of the Christian faith, with the original title Apologie de la religion Chrétienne (“Defense of the Christian Religion”). One of this work main strategies is to use the contradictory philosophies of skepticism and stoicism to bring the unbeliever to such despair and confusion that he would embrace God. It is in this context where he comes up with what has been called Pascal’s Wager:

“If there is a God, He is infinitely incomprehensible, since, having neither parts nor limits, He has no affinity to us. We are then incapable of knowing either what He is or if He is. This being so, who will dare to undertake the decision of the question? Not we, who have no affinity to Him.

“Who then will blame Christians for not being able to give a reason for their belief, since they profess a religion for which they cannot give a reason? They declare, in expounding it to the world, that it is a foolishness, stultitiam; and then you complain that they do not prove it! If they proved it, they would not keep their word; it is in lacking proofs, that they are not lacking in sense. “Yes, but although this excuses those who offer it as such, and takes away from them the blame of putting it forward without reason, it does not excuse those who receive it.” Let us then examine this point, and say, “God is, or He is not.” But to which side shall we incline? Reason can decide nothing here. There is an infinite chaos which separated us. A game is being played at the extremity of this infinite distance where heads or tails will turn up. What will you wager? According to reason, you can do neither the one thing nor the other; according to reason, you can defend neither of the propositions.

“Do not then reprove for error those who have made a choice; for you know nothing about it. “No, but I blame them for having made, not this choice, but a choice; for again both he who chooses heads and he who chooses tails are equally at fault, they are both in the wrong. The true course is not to wager at all.”

“Yes; but you must wager. It is not optional. You are embarked. Which will you choose then? Let us see. Since you must choose, let us see which interests you least. You have two things to lose, the true and the good; and two things to stake, your reason and your will, your knowledge and your happiness; and your nature has two things to shun, error and misery. Your reason is no more shocked in choosing one rather than the other, since you must of necessity choose. This is one point settled. But your happiness? Let us weigh the gain and the loss in wagering that God is. Let us estimate these two chances. If you gain, you gain all; if you lose, you lose nothing. Wager, then, without hesitation that He is.” (Pensées, § 233)

According to Pascal, any reasonable person, even if he finds it difficult to believe in God’s existence, is better off living as if God really did exist, because if God’s does exist, then, he would gain eternal life and, if it turned out God’s did not exist, then, his lost would be minimal. A pretty reasonable wager, indeed.