“Let It Be”: The truth behind Paul McCartney’s heavenly visit from Mother Mary 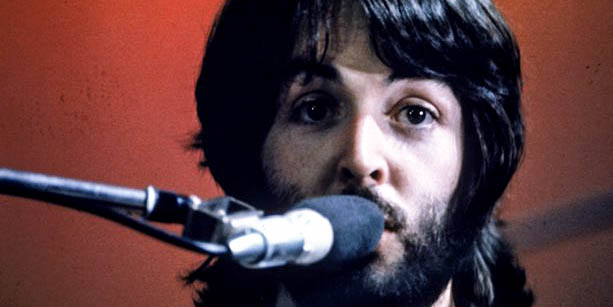 “When I find myself in times of trouble, Mother Mary comes to me/Speaking words of wisdom: Let it be.”

Dreams have always been good to Paul McCartney. One morning in 1965 he famously awoke with the tune for “Yesterday” fully formed, its melancholy melody belaying his ultra sunny reputation as the Cute Beatle. His troubles had seemed so far away during these heady days of mop-topped mania, but three years later the dream shared with his band mates had transformed into a nightmare of creative disagreements, business squabbles, and personality clashes. “I was going through a really difficult time around the autumn of 1968,” McCartney later recalled in Marlo Thomas’ book, The Right Words at the Right Time. “It was late in the Beatles’ career and we had begun making a new album, a follow-up to the ‘White Album.’ As a group we were starting to have problems. I think I was sensing the Beatles were breaking up, so I was staying up late at night, drinking, doing drugs, clubbing, the way a lot of people were at the time. I was really living and playing hard.”

It was then, during one of the brief bouts of fitful sleep that managed to punctuate his insomnia, that he was visited in his dreams yet again — this time by a soothing presence of faith and fortitude. Waking the next morning feeling restored, McCartney put pen to paper for a new song that recalled this moving experience.

When I find myself in times of trouble, Mother Mary comes to me/Speaking words of wisdom: Let it be.

In years to come, fans across the globe would interpret this figure as the Virgin Mary, Mother of Jesus, but the truth was much was more literal for the song’s composer. He had felt the warm comfort of his own mother, Mary Mohin McCartney, who succumbed to breast cancer when he was just 14 years old. “I had a dream I saw my mum, who’d been dead 10 years or so,” he told author Barry Miles in the authorized biography, Many Years from Now. “It was so great to see her because that’s a wonderful thing about dreams: you actually are reunited with that person for a second; there they are and you appear to both be physically together again. It was so wonderful for me and she was very reassuring. In the dream she said, ‘It’ll be all right.’ I’m not sure if she used the words ‘Let it be’ but that was the gist of her advice. It was, ‘Don’t worry too much, it will turn out OK.’ It was such a sweet dream I woke up thinking, ‘Oh, it was really great to visit with her again.’ I felt very blessed to have that dream. So that got me writing the song ‘Let It Be.’”

The words were drawn from the same subconscious wellspring that provided the mournful lyrics for “Yesterday.” Mary’s sudden death devastated the McCartney family, for whom she was a primary source of strength and support. “She had been a nurse, my mum, and very hardworking, because she wanted the best for us. We weren’t a well-off family—we didn’t have a car, we just about had a television—so both of my parents went out to work, and Mum contributed a good half to the family income. At night when she came home, she would cook, so we didn’t have a lot of time with each other. But she was just a very comforting presence in my life.” Kept in the dark about her illness, McCartney was so numbed by the shock of the loss that his first reaction was to blurt: “What are we going to do without her money?” It was a line that would haunt him for years to come.

McCartney would cope with his grief by throwing himself into mastering the guitar. It would also serve as the foundation of his friendship with John Lennon, who would lose his mother less than two years later in a traffic accident. “That became a very big bond between John and me,” McCartney said during the Beatles’ Anthology documentary. “We both had this emotional turmoil which we had to deal with and, being teenagers, we had to deal with it very quickly.” Together, they pushed each other to create. Though it may be a stretch to say that McCartney’s earliest songwriting effort, “I Lost My Little Girl,” was directly inspired by the family trauma, “Yesterday” becomes especially poignant when imagined from the perspective of a bewildered young boy who said the wrong thing after mother had abruptly been taken away.

“Why she had to go I don’t know, she wouldn’t say/I said something wrong, now I long for yesterday.”

While “Yesterday” impeded on his carefree days of fame, fortune and adulation with memories of deep regret, “Let It Be” is its mirror image—offering hope from deep within his darkest place. “I woke up with a great feeling. It was really like she had visited me at this very difficult point in my life and gave me this message: Be gentle, don’t fight things, just try and go with the flow and it will all work out.”

The song would first take shape in January 1969, during the torturous sessions for what was then known as Get Back, a multimedia project combining a television special with a live album. Relations between the Beatles were even more fractious than they were while recording the White Album six months earlier, and McCartney felt the group crumbling beyond repair. Thankfully, his spirits were bolstered by the new woman in his life: future wife Linda Eastman. “Not very long after the dream, I got together with Linda, which was the saving of me,” he recalled. “And it was as if my mum had sent her, you could say.”

The Get Back experience was so unpleasant that the tapes were shelved for a year, during which time the Beatles managed to record one final album, Abbey Road, named for their longtime creative home. McCartney would return there on January 4, 1970, along with George Harrison and Ringo Starr, to put the final touches on the previously recorded “Let It Be.” In circumstances befitting their estrangement, Lennon was absent for the session; instead Linda stayed by McCartney’s side for encouragement and, unusually, creative input. “The song is one of the first things Linda and I ever did together musically,” he remembered. “I just thought, ‘Oh it would be good to try harmony in mind.’ Although Linda wasn’t a professional singer, I’d heard her sing around the house, and knew she could hold a note and sing that high. So she tried it, and it worked and it stayed on the record. You can hear it to this day.” Harrison would also contribute backing vocals and a new guitar solo, concluding the Beatles’ final session as a group.

“Let It Be” would serve as the band’s last single before their split was announced in April, and also as the title track to their swansong LP released one month later. It has since achieved the status of a beloved modern hymn, bringing joy and inspiration to untold millions. In 1986 it was chosen as the star-studded finale at the London stage of Live Aid, beaming Mary’s heavenly message of faith across the globe. The song would bring solace to its author once again in 1998, when a crowd of 700 sang it at a memorial service for Linda, who had lost her battle with breast cancer. For McCartney, it was a heartbreaking echo of the tragedy he endured as a child, but music continued to see him through.

Despite its intensely personal meaning, McCartney has remained good-natured about some of more pious interpretations. “Mother Mary makes it a quasi-religious thing, so you can take it that way, I don’t mind,” he told Miles. “I’m quite happy if people want to use it to shore up their faith. I have no problem with that. I think it’s a great thing to have faith of any sort, particularly in the world we live in.”