3 Filipino bishops on the road to canonization 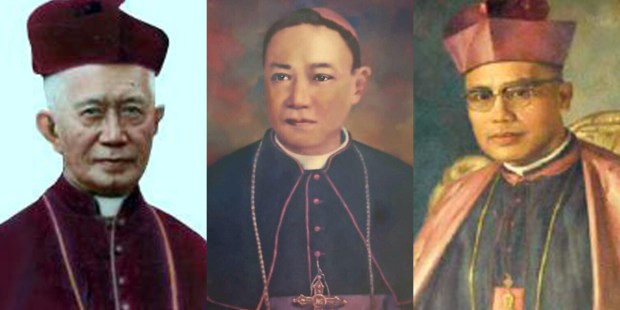 And one of the bishops was found incorrupt.

Among the many causes for canonization being considered in Rome are those of three bishops from the Philippines. Each of the bishops lived in the 20th century and was highly regarded for his sanctity.

Born in 1889 in Lipa City, Batangas, Obviar started out life as an orphan, being taken care of by relatives. Nevertheless, his faith was nurtured throughout his childhood, and he pursued the priesthood at an early age.

Obviar was ordained a priest in 1919 and possessed “an extraordinary charism for organizing catechists as well as for teaching catechism most especially to the old folks. In Lipa City, where he became also the Parish Priest, he established many catechetical centers in the poblacion and in the barrios.” When he was ordained a bishop, this charism followed him and he made it a priority to form rural catechists.

After several decades as a faithful bishop who guided his flock, Obviar died on October 1, 1978. His cause for canonization was opened in 2001 and has since been named a “Servant of God.” On November 7, 2018, he was declared “venerable” by Pope Francis.

Born in 1877 in Vigan, Ilocos Sur, Verzosa was provided a firm foundation in faith by his family. He also felt called to the priesthood in his youth and was ordained in 1904.

Verzosa was a zealous evangelizer in his early priesthood, experiencing fierce resitance from those who turned to the Aglipayan religion. He was almost killed by a spear for his evangelization efforts.

In 1916 he became the bishop of Lipa, and went to work building schools, seminaries, catechetical centers and convents. Verzosa was also known for allowing a particular site of an apparition to be venerated by the faithful. When it was later discovered that it was a hoax, Verzosa was humiliated and exiled from the public eye. In all things he accepted the will of God and the Church, saying on his deathbed, “Let us bow to the will of the Church.”

Born in 1914 in Barangay Cogon, Carcar, Camomot always had a special love of the poor. At first he desired to be a simple farmer, but later felt God’s call to the priesthood.

Camomot was ordained in 1941 and then elevated to the episcopate in 1955. He continued to serve the poor as a bishop and lived himself in simple poverty. One story from his life illustrates his care for the poor.

His simplicity was attested by so many people, even fellow prelates. There were many stories about the Archbishop’s Franciscan-like poverty. Cardinal Vidal has once told that on one occasion he noticed that Archbishop Camomot was not wearing his pectoral cross, the cross that a bishop wears on his breast. Curious, he asked Monsignor Camomot about it. He made some excuse. Later a priest told the Cardinal that the Archbishop had pawned his cross to give some money to the poor. The Cardinal later gave him a new cross and told him not to give it away.

He died from a car accident on September 27, 1988, and was highly regarded for his sanctity. The cause for his canonization was opened in 2010, and he has received the title “Servant of God.” According to the website of his cause, “his body remained incorrupt twenty years after his death.”