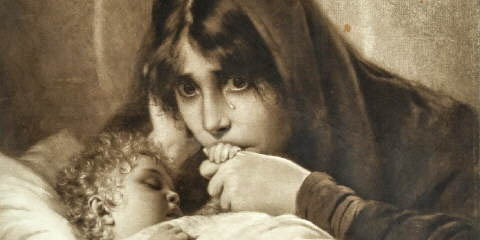 Being conceived without sin doesn’t protect you from trauma.

It’s a funny thing about the liturgical year—two weeks ago Jesus was born, then almost immediately we remembered the Slaughter of the Innocents, though it would have happened at least 40 days after Jesus’ birth. Then came the Magi, and suddenly Jesus was a full-grown adult being baptized in the Jordan. We have to get to Ordinary Time, of course, so we can prepare for Lent starting all too soon. And while the march from the manger to the Cross makes perfect sense, cramming 33 years into every liturgical year sometimes leaves me hungering for more time to sit with these moments that are so easy to skim over.

This year, I’m focusing on Jesus’ mother. I want to love her better and understand her more, but mostly I want to let her teach me about her Son, how to love and be loved by him. So I’m sitting with her and meditating on different moments in her life, different titles she’s been given, different images and prayers. And right now, with Christmas packed away and Bethlehem behind me, I’m thinking about what it was like for Mary to leave Bethlehem.

It was no peaceful parting, of course. The wise men had moved on that day, leaving in their wake a mother stunned at the nations adoring her son and already holding the myrrh she knew would anoint his corpse. But her job wasn’t to live in Good Friday. Right now, she had him. And for the next 30 years, he would be hers. She had no way of knowing how long he would be with her—that we know of—so, like every mother who’s been touched by loss, she tried to hold him tight and love him now.

She went to bed that night trying to move out of the world of kings and incense and prophecies fulfilled, ready to return to the hidden life of ordinary beauty, of dishes and diapers and a perfectly ordinary baby who was anything but. After a wild day, it was time to be back to normal.

But the Lamb of God didn’t come for 30 years of pleasantness and three hours of pain. He came to suffer as we suffer. And now his life was threatened. Joseph shook her awake, the go bag already packed. Like so many mothers, she grabbed her child and ran.

Did she know what would happen to the other babies in Bethlehem, to the sons of the neighbors she’d come to love since arriving that cold midwinter night? Did she sob silently as she clung to her sleeping boy, the donkey taking them slowly—too slowly—from the deep and dreamless sleep that would soon wake to a nightmare? Or did she cling to the hope that only her son was threatened, that as long as she could keep him safe, there would be no slaughter?

Whether she knew or not, I’m sure the imagined screams of mother and child haunted her as they headed further into the unknown. Those were her children, the slaughtered and those left behind. And somehow she had to move on. She couldn’t spend her life in anguish over what she had been powerless to prevent. She couldn’t let survivor’s guilt cripple her, nor could she allow herself to become angry at God. She had a child to love and an ordinary life to live. She had to navigate life as a refugee, a stranger in a strange land until God called his son out of Egypt.

Being conceived without sin doesn’t protect you from trauma. Mary may have had nightmares. She may have found herself crying without even realizing that she was thinking of them, the children who had died to save her son, the parents who mourned them. And then perhaps her mind went to the prophecies, to the slaughter awaiting him.

We can’t know what she did then, how she talked herself down or whether she even needed to. But I have a feeling that there were moments when the tears spilled over, just as there are for us, and that a young, heartbroken Mary pulled a squirmy Jesus to herself and clung to him. When she forgot how to be a woman filled with joy, she grabbed ahold of Jesus and belonging to him held the darkness at bay for a while.

I don’t know the trauma you’ve dealt with, the guilt you hold on to, or the fears you have for the future. But your Mother does. And she’s suffered something similar herself. As you walk with the Lord into uncertainty, in a life where it seems the only inevitability is the Cross, take a lesson from the Blessed Mother: cling to Jesus. Turn from the memories and the dread and fix your eyes on him. In a world of slaughtered innocents, only he can bring peace.

Read more:
How many Holy Innocents were killed by King Herod?

Read more:
“To Jesus through Mary”: I finally get that!