This Novena for Purity finds inspiration in St. Thomas Aquinas 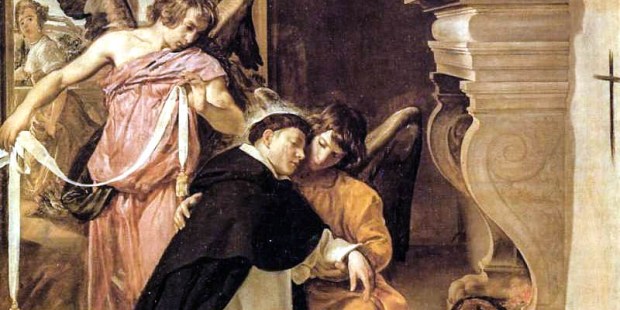 And Blessed Pier Giorgio Frassati was a member of the confraternity that promotes this series of prayers.

Many people look to Blessed Pier Giorgio Frassati as an inspiration and intercessor for assistance with living out the Catholic faith. I remember hearing about him for the first time while I was on pilgrimage at World Youth Day. The young people swooned over him! They couldn’t wait to visit the chapel set up with his relic and to pray for his intercession there.

Why? To Gen Y, he’s as hipster as St. John Paul II. They both make Catholicism look as good as it really is.

They adventured into the Alps to experience the beauty and grandeur of God and His creation. They prayed the Divine Office on camping trips and pondered what it means to be truly human. They sacrificed for others, took action on issues of peace and justice, but never forgot about the sacramental life of the Church and the role of the Blessed Mother. Through their daily witness and faithfulness, they motivated the young and old alike to be courageous in both their earthly and heavenly affairs.

Pier Giorgio also joined the Angelic Warfare Confraternity, which shows he took his purity and chastity seriously. This group of men and women have dedicated themselves to pursuing and promoting chastity under the powerful patronage of St. Thomas Aquinas and the Blessed Virgin Mary. Pier Giorgio admired St. Thomas as a powerful patron of chastity and purity, and for good reason.

St. Thomas Aquinas is well known for his commitment to the virtue of chastity. He is famous for this virtue because of something that happened when he tried to follow his vocation and join the Dominicans. His parents opposed his call so much that they even had him captured by his own brothers and jailed in a family castle. Then, in an attempt to get St. Thomas to abandon his religious vocation, his brothers tried to get him to break his vow of chastity. They sent a prostitute into his prison room.

But the plan did not work as the family hoped. St. Thomas drove the woman out of the room and slammed the door behind her. Immediately, he fell to his knees in gratitude to God and asked God to preserve his chastity, purity, and intention to live the religious life.

His canonization records explain that at this moment St. Thomas had a vision: “Two angels came to him from heaven and bound a cord around his waist, saying, ‘On God’s behalf, we gird you with the girdle of chastity, a girdle which no attack will ever destroy …’ The angels’ gift preserved Saint Thomas from sexual temptation and bestowed upon him an enduring purity that ennobled all his thoughts and actions.”

According to the Catechism of the Catholic Church, “chastity means the successful integration of sexuality within the person and thus the inner unity of man in his bodily and spiritual being.” It is lived according to your state in life, and frees you to put your heart where God desires it.

Pope Pius XI wrote, “If Saint Thomas had not been victorious when his chastity was in peril, it is very probable that the Church would never have had her Angelic Doctor.”

St. Thomas received the grace of chastity and purity. Like Blessed Pier Giorgio Frassati, we can seek St. Thomas’ intercession that we be open to this amazing grace. The Angelic Doctor provided the inspiration for the Dominican Order for the Confraternity, which today includes a formal enrollment, the wearing of a cord and medal, as well as daily prayers.

The Angelic Warfare Confraternity suggests a Novena for Purity. Through the intercession of Saint Thomas Aquinas and Mary, the Mother of God, the novena invites us to pray for our senses to be purified and for the strength to resist temptation.

The novena begins on January 20 and ends on the Feast of St. Thomas Aquinas, January 28.