If you do only one thing this Lent, remember your death 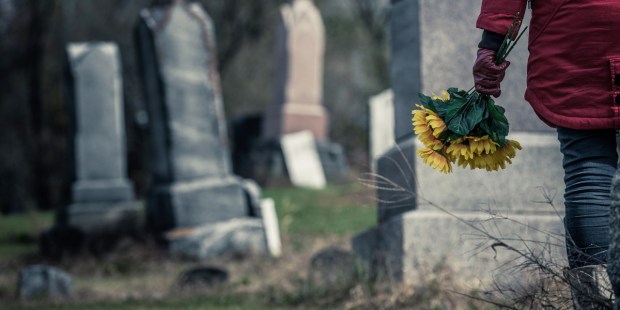 Paying no heed to it will not make it go away.

A Savior who simply makes our life easier is a balm and a comfort. But a Savior who judges us at the end of our lives and who saves us from death is a more intense figure. It’s not as easy to integrate this Jesus into a distracted life.

Perhaps this is why the spiritual practice of remembering one’s death has waned in popularity.

There is an apparent lack of focus in today’s culture on preparation for the end of one’s life. Even among many people of faith, Christianity has become merely a path to greater simplicity, comfort, and ease. Some resent the idea that God’s ways are not our ways (see Isaiah 55:8-9). They refuse to surrender their lives—especially their opinions, plans, and desires—to God.

People cannot stomach mystery these days. Anything that involves the discomfort of obscurity is not welcome. Death is among those things rejected in modern society. Death surrounds, infiltrates, and inhabits much of modern culture, but it is seldom faced and rarely talked about. And when it is, death is often minimized and reduced to material realities.

Death is not a popular topic even among religious people whose lives should be straining toward heaven (see Philippians 3:13). Other aspects of the faith are often emphasized while death is left as something to deal with at the very end of life. Indeed, death is a frightening specter, a dazzling paradox, and a terrifying abyss. It is no wonder that people desire to ignore it. But paying no heed to it will not make it go away.

Christians in particular are called to meditate on death—perhaps the most terrifying reality in human existence—not because humans have the stamina to face off with death, but because we have a Savior.

The Book of Sirach encourages this fundamental spiritual practice of remembering one’s death: “In whatever you do, remember your last days, and you will never sin” (7:38). St. Benedict considered the practice so important that he included it in his Rule for monasteries, written in the 6th century: “Keep death daily before one’s eyes” (4.47). The Imitation of Christ—perhaps the most widely read Christian classic after the Bible—includes an entire section on the importance of meditating on one’s death.

Read more:
If you’re hurried and finding there’s never enough time, maybe this is the solution

Justifiably, many people are afraid to incorporate the practice of remembering death into their lives. But the fear of meditating on death prevents one from losing a fear of death. The early Church fathers are quite emphatic that meditation on death is necessary in order to think about it in a Christian way. The Christian faith means nothing if it does not impact how death is viewed.

Christ has transformed death! Death for the Christian is not annihilation or despair but rather a step into the loving arms of a Savior.

Lent is a perfect time to begin a practice of remembering one’s death. Ash Wednesday immediately focuses our attention on death when the cross—the tool of death that became the tool of our salvation—is traced on our foreheads. The words the priest or minister says are inspired by the words that God said to Adam and Eve after the first sin, “Remember, man, you are dust and to dust you will return.” (see Gn 3:19). In Latin, the same phrase is: Memento, homo quia pulvis es, et in pulverem reverteris. A shorter way of saying this is Memento mori or “Remember your death.” These words—memento mori—illumine the entire penitential season of Lent.

Christians need a Savior because we are but dust and ashes. We need a Savior because the only person who can save us from death is Jesus Christ, who is Life itself. In the Lenten season, as we meditate on the central mysteries of the faith, the mystery of death—transformed by the Cross—is a great place to start.

This Lent, try to live the spirit of “memento mori” throughout the entire season. Not sure how? Check out some of the ideas in this article.