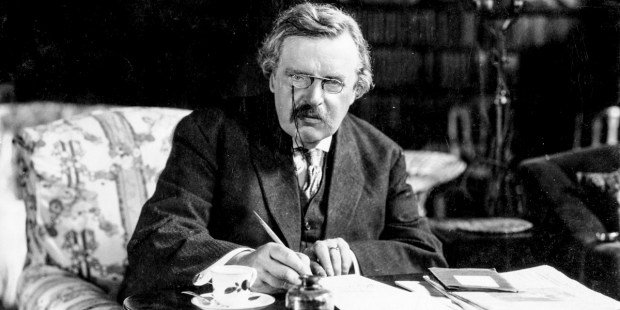 Many generations have found the ideas of Christian orthodoxy not only useful, but also true.

The main drive behind the evolution of the vocabulary of a language is that, as speakers living in a particular time, we use language guided by our own peculiar preferences. Guided by these preferences we start using some words more than others and, not only that, we classify them into those we think of with approval and others we think of as distasteful.

In this sense, it seems our era has given preference to words of “revolutionary” origin. Nowadays, “revolution” is always a term of praise and to be a rebel is something akin to a moral ideal. It is no surprise, then, to find “orthodoxy” has followed the way of “tradition” and other terms with conservative connotations, it comes as no surprise that it is not only used less frequently than those revolutionary terms we just mentioned, but also that it is always used in a pejorative manner. I cannot think of a context in the modern world where “he is very orthodox” is used as a term of praise.

But just as it is the case with “tradition,” the modern usage of “orthodoxy” (and its derivatives) is mostly based on misunderstanding and ignorance. Many people conceive of orthodoxy as an artificial creation, as a rather small group of ideas that a small group of people arbitrarily create and artificially keep alive by constantly rejecting new ideas. But this is not really the meaning of orthodoxy; that is, this is not the meaning given to it by the many philosophers who have thought of it as something worth defending.

Chesterton, for instance, does not think of orthodoxy in this way. For him, orthodoxy closely resembles what William James and his school of Pragmatism understood as common sense: a group of ideas that have survived the onslaught of time because the humans of many generations have found them not only useful, but also true. For Chesterton, Christian orthodoxy stands for those ideas and opinions that have survived the onslaught of time and have ended up forming what is now known as Western Civilization:

“For if this book is a joke it is a joke against me. I am the man who with the utmost daring discovered what had been discovered before. If there is an element of farce in what follows, the farce is at my own expense; for this book explains how I fancied I was the first to set foot in Brighton and then found I was the last. It recounts my elephantine adventures in pursuit of the obvious. No one can think my case more ludicrous than I think it myself; no reader can accuse me here of trying to make a fool of him: I am the fool of this story, and no rebel shall hurl me from my throne. I freely confess all the idiotic ambitions of the end of the nineteenth century. I did, like all other solemn little boys, try to be in advance of the age. Like them I tried to be some ten minutes in advance of the truth. And I found that I was eighteen hundred years behind it. I did strain my voice with a painfully juvenile exaggeration in uttering my truths. And I was punished in the fittest and funniest way, for I have kept my truths: but I have discovered, not that they were not truths, but simply that they were not mine. When I fancied that I stood alone I was really in the ridiculous position of being backed up by all Christendom. It may be, Heaven forgive me, that I did try to be original; but I only succeeded in inventing all by myself an inferior copy of the existing traditions of civilized religion… I did try to found a heresy of my own; and when I had put the last touches to it, I discovered that it was orthodoxy.” (Orthodoxy, Introduction)

But the most important aspect of Chesterton’s notion of orthodoxy is that all the ideas that constitute it have to be discovered over and over again; that the fact of having withstood the passing of time guarantees nothing. Every individual has to learn them anew and has to defend them like the very first men who first discovered them. It was perhaps against a similar understanding of orthodoxy that Nicolás Gómez Dávila wrote: “To mature is to transform an always increasing number of common places into a true spiritual experience.” (Escolios a un texto implícito, § 655)