“Padre Pio is often with me during exorcisms, and the devil fears him” 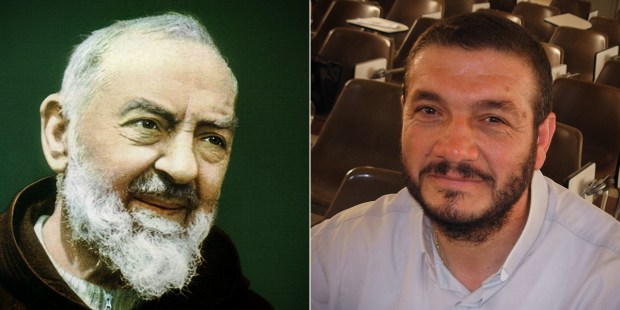 Fr. Piero Catalan is a spiritual disciple of Fr. Gabriele Amorth. He says that during exorcisms the demon calls the saint of Pietrelcina “the bearded man” or “Francesco Forgione.”

He came to the attention of the media because he was the leader, on December 4, of a meeting at the Telesio Grammar School in Reggio Calabria, Italy, to discuss the “horror game” that has been popular online for quite a while, the “Charlie Charlie Challenge.”

A conference with the Focolarini

Fr. Piero Catalano, disciple of Fr. Gabriele Amorth, the famous exorcist of the diocese of Rome who died in 2016, is a priest and exorcist of Reggio Calabria, explained why he uses the relics of saints during exorcisms and invokes Saint Pio of Pietrelcina against the devil to good effect.

After a life dedicated to volunteer work with the Gen Movement (connected to the Focolari Movement founded by Chiara Lubich), on December 8, 1988 he became consecrated to God in the priesthood. He has been the pastor of two towns on the Jonica coast of Reggio Calabria—Roccaforte del Greco and Saint Pantaleone—and today is the pastor of the Parish of Saint John Nepomucene and Saint Philip Neri in Arangea.

The demons fear even to say his name!

Fr. Piero studied for years to be an exorcist and is a spiritual son of Fr. Amorth. He started practicing prayer of liberation at the age of 18, and was named an exorcist three years ago.

In his office, he has many relics of saints. “I use them during my exorcisms,” he explains to Italian newspaper Corriere della Sera (last December 19). “Which saint do I invoke most often? I have a special love for Saint Pio of Pietrelcina, who often makes himself present during exorcisms. The possessed person becomes afraid. He’ll say, ‘The one with the beard is here!’ And I reply, ‘By any chance, is he named Saint Pio of Pietrelcina?’ The demon will respond, ‘No, his name is Francesco Forgione.’ The devil fears even to name him.”

From nausea to cold

Fr. Piero says that he becomes aware of a demonic presence, a possession, or a vexation, through typical reactions of the demon. “For example, as soon as I put my hand on the person’s head, he or she pulls back, turns very cold, feels like he or she is choking, or becomes nauseated, etc.” If it’s not a case of demonic presence, then the exorcist limits himself to a prayer of liberation.

“Do you want to come over to my side?”

“The demon,” Fr. Piero observes, “does everything possible to tempt us exorcists. Once, he asked me, ‘How much money do you want to come over to my side?’ I started to laugh, because I’ve made a vow of poverty. I don’t have money to pay for my own funeral if I die, and I share everything with the poor. And the devil said, ‘If I could, I’d kill you instantly.’ Then I replied, ‘But you can’t because I belong to Jesus!'”