Check out these spectacular sanctuaries built with Legos

Over the 60 years since the invention of the Lego brick, a number of incredible religious monuments have been created.

The groundbreaking Lego bricks celebrate their 60th birthday this year. Created in 1958, the toy that awakens children’s creativity has also inspired great artists. Around the world, artists have gathered to share their passion and to exhibit their most beautiful creations. And at these conventions, many religious buildings have been reproduced, requiring several hours of work and thousands if not millions of pieces to assemble.

Here’s a selection of other beautifully produced works taken from Pinterest.

Cathedral of the Holy Trinity, Dresden

The Vatican in a scale model

Some 500,000 plastic bricks were needed by Father Bob Simon, a priest in Moscow, Pennsylvania (USA) — you read that right — to reproduce the Basilica of St. Peter in Rome and the adjoining square surrounded by a colonnade path. This work, which took him 10 months, was presented to the Holy Father during his visit to the United States in 2015. We let you enjoy the details in this slideshow. 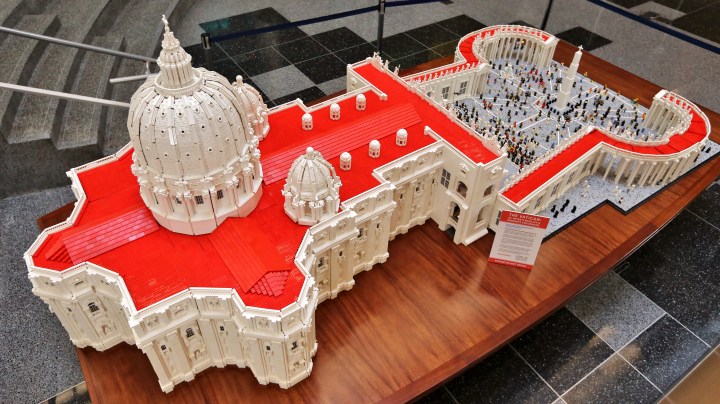 This article was first published in the French edition of Aleteia.