Pope visits innovative home for mothers convicted of minor crimes, who keep their children with them 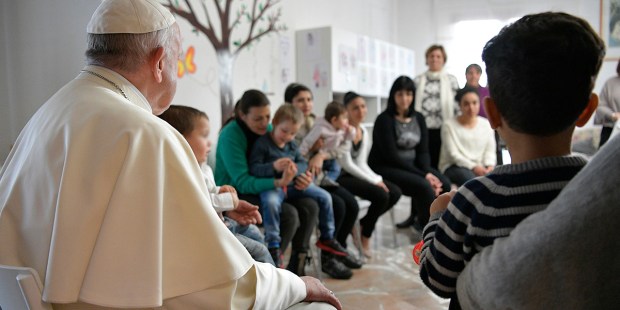 Pope Francis today continued with his Fridays of Mercy initiative, popping in by surprise on “Casa di Leda,” a home to five mothers and their children.

Opened in March of 2017, Casa di Leda is run by the non-profit “Cecilia Onlus.” At Casa di Leda, mothers detained for minor offenses whose parental rights are still legally recognized can live their period of detention with their children within a family setting.

The mothers are accompanied by staff, educators, and volunteers from the volunteer association called “A Roma Insieme” (To Rome Together).

The mothers staying in the structure are allowed to drop off and pick up their children from school. They take part in activities which prepare them to hold a job in view of future reintegration into society. This is the first structure of its type in Italy, and perhaps, in the world.

Pope Francis was accompanied by Archbishop Rino Fisichella, president of the Council for the New Evangelization, which organizes the Fridays of Mercy initiative.

It was 4:00 in the afternoon when the pope surprised the five mothers (between the ages of 25 and 30) and their children, and staff as they were going about their normal afternoon activities.

Pope Francis exchanged a word with the mothers and staff on duty, and he played with the children. The children welcomed his gift of large Easter eggs with shouts of joy. They then invited him to have a snack with them.

The mothers in their turn gave the pope a gift which is the product of the many simple activities and tasks that they carry out inside the shelter. They also had the chance of telling the pope about the opportunity they have of being able to raise their own children, despite their situation.

Casa di Leda Director, Dr. Lillo Di Mauro, told the pope, “Your Holiness, dear Father, we are the invisible ones.” He then described the effort it took in setting up the structure. Located in Rome’s EUR district, and hidden in a beautiful, green residential area, “Casa di Leda” was formerly owned by persons connected to organized crime. Seized by the state, it has been transformed into this haven for women in difficulty.

The Holy Father also left gifts for the mothers, including a parchment signed in memory of his visit. His visit lasted about an hour, after which he returned to Santa Marta, in the Vatican.