Picturing the Passion: “The Mocking of Christ” by Fra Angelico

Another in a series on Christ's Way of the Cross as seen in the creations of the Great Masters.

The lyrics of this beautiful hymn by Loretta Lynn express the image in today’s painting, “The Mocking of Christ” by Fra Angelico. The honorary epithet “Fra Angelico” or “the Angelic Brother” was attributed to the painter after his death in 1455. Baptized Guido di Piero, his love for Christ led him to enter the religious order of the Dominicans in 1420.

Vasari, the great author of the Lives of Artists (1550), describes Angelico as a “simple and most holy man who painted with facility and piety.” Vasari goes on to describe his saintly life, stating, “Fra Angelico never set his hand to a brush without first saying a prayer. He never painted a crucifix without tears streaming down his cheeks. He befriended the poor and now is befriended by Heaven.” In 1982, Pope John Paul II proclaimed the beatification of this Blessed painter, recognizing him as the “Saint of all Artists.”

But where and when did it all begin? In 1435 Cosimo de Medici, the rich banker and Gonfalonier of Florence, donated a generous amount to renovate the Dominican convent and the Church of San Marco. Fra Angelico was given the task to paint the altarpiece and decorate the walls of the Church and of the Convent. 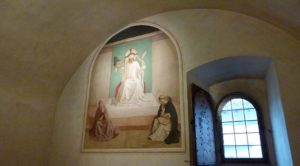 Of all the religious orders, the Dominicans attributed great consideration to visual images as media of prayers, meditation and study. The cell of each friar was furnished with not only a bed, desk and kneeler but also a contemplative fresco representing an episode from the Story of Christ.  These paintings often depicted the Virgin Mary and Saint Dominic as witnesses of the scene, therefore serving as intermediaries between the Dominican friars who lived in the cells and Christ Himself.

One such Gospel-synthesized fresco is the “Mocking of Christ” situated in the East Corridor, also known as the Corridor of the Elderly Clerics. The bitter humiliation that Christ suffered before being crucified is evoked through this painting in an atmosphere of divine stillness and mystical emotion.

The artist grasps the heights of abstraction through this symbolic composition.

Bridging humanity and divinity are the two figures of the Virgin Mary and Saint Dominic seated on a pink plinth. Facing the viewers, they bend their arms and hold up their chins in a traditional gesture suggesting divine thought and recollection. Their pose was designed to assist the resident friar in prayer. 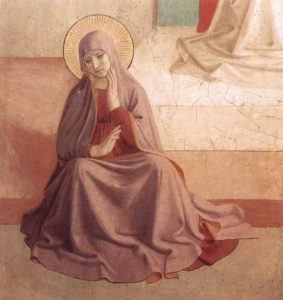 The Virgin Mother appears to look away, for she cannot endure to see the humiliation and suffering of her Son. In quiet sadness she droops down her gaze as she resigns to Divine will in absolute obedience. On the other end, St. Dominic, led by the star (read Spirit), absorbs the scriptures with rapt attention. This thoughtful frame invites us to ponder on the Passion not through our eyes but rather through his heart and mind. His reflection finds form through the image of Christ dominating the center of the painting. 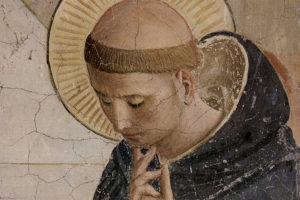 Set against a white background is the regal, blindfolded figure of Jesus seated on a red dais, a travesty of a throne. Dressed in luminous white, in one hand He holds a bamboo stick in place of a sceptre and in the other He holds a stone in place of the orb. This captures the utter ignominy afflicted upon His pure divinity.

On the either side of Christ are displayed the instruments of His mockery. The throng of scornful soldiers is depicted as a group of disembodied hands. The first hand holds a stick forcing the thorns down His head while the second prepares to slap Him; the third hand attempts to pull at His beard while the fourth jeers at Him. A boorish soldier launches spittle on His noble face and raises his cap in clear indignation. 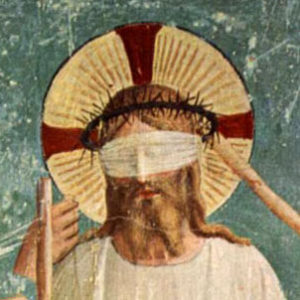 And yet Christ bears this disgrace in gentle and humble submission. Through the transparent blind-folding material we catch a glimpse of His eyes closed in prayer and acceptance. He does not complain — rather He contemplates on the fulfillment of the prophesies of redemption.

The black sky behind the wall recalls the darkness of the hour, the red seat alludes to the shedding of His blood while the green curtain induces hope in the Resurrection. The interplay of His dual nature as God and man is best expressed through the crown of thorns signifying His humanity and the cruciform Halo manifesting his divinity.

For indeed He is God, who could have called ten thousand angels to destroy the world and set Him free; but He is God, who out of His magnanimous love chose to die for you and me!

This article was published in partnership with Indian Catholic Matters, where it was first published.