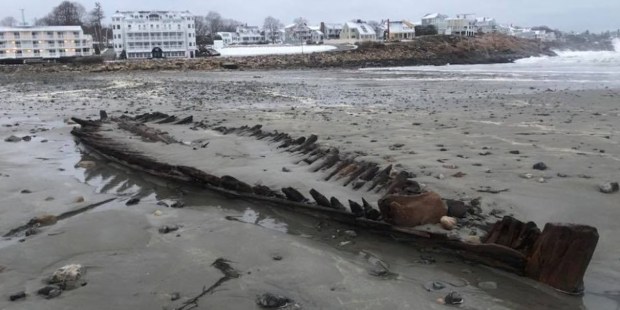 If only every storm were this interesting.

Just as Brigadoon appears in the mists every 100 years, once every decade or two the folks living on the coast of Maine are treated to the sight of shipwrecked skeletons rising from the sands. This year, thanks to a nor’easter that raged across the Northeast causing destruction and power outages, these pieces of American history are visible once more.

The tides drew out as the waves and winds abated, which pulled the top layers of sand with them to reveal the jagged ribs of vessels long forgotten. Residents say that the remains of these unidentifiable vessels have turned up several times in the last 75 years, and each time they draw a crowd of specialists who seek to determine their histories.

This wreck, on the beach in York, became visible in 1958 and was theorized to be a “pink,” a small square-shaped vessel with a flat bottom. But when it was uncovered by another storm in 1980 it was examined by marine archaeologist Warren Riess, whose tests dated the ship from the Revolutionary War era. The remains of this “John Doe” ship were mapped and are still being studied by the Maine Historic Preservation Commission.

In Kennebunk, there is another similar wreck, however this can only be one of two ships launched in the early 19th century. In 2013, Sea Coast Online released a report, after the nor’easter called “Nemo” brought the ship graves up, which has the history of several of these wrecks:

The 139-ton brig Merchant was built upriver by Kennebunk shipbuilder Nathaniel Gilpatrick and launched Oct. 13, 1804. After a West Indies trading career, she was cast away on the Kennebunk sandbar upon her return from Havana, Cuba, at the beginning of April 1820. All her cargo, sails and rigging were reportedly saved.

The 160-ton brig Columbia, launched upriver just a week after the Merchant, was owned by Richard Gilpatrick, Jeremiah Paul and Kennebunk Bank President Joseph Moody. Like the Merchant, she was engaged in West Indies trade with Cuba and Puerto Rico.

A third wreck site is also in Kennebunk, on “Mother’s Beach.” This one was identified by historian and author Edward Rowe Snow to be the remains of a coasting packet, the Industry, which was lost on her maiden voyage. The ship was identified by a 6-inch nail taken from the wreckage, which had an unusual diamond shaped tip.

“A colony of shipbuilders from Northern Ireland settled in St. George. They were the only ones to use a diamond-shaped wedge at a convex angle in the end of their treenails,” Snow explained.

The revelations that “Nemo” left in its wake were not contained to shipwrecks. We now know the shores of Gooch’s Beach and Wells Beach to be littered with ancient tree stumps. In 1959, geologist Arthur M. Hussey radiocarbon dated these hunks of wood to be more than 3,000 years old. These white pine trees grew when the sea level was much lower and then became submerged. Over time, they drowned and became naturally preserved by the sea.