How to get atheists to defend nuns (maybe) 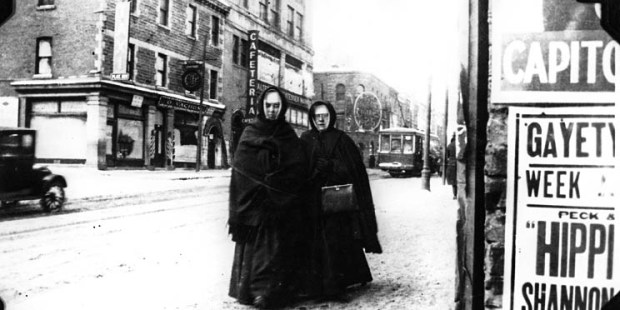 “He was an atheist, a priest-eater,” says Pope Francis, “yet he defended the nuns.” A man his father knew had gotten very sick, and had three children to care for while his wife was away working all day. Francis tells the story in the preface to a new book on the Venerable Stefano Pernet and the Little Sisters of the Assumption, just published in Italy.

The Little Sisters heard about the man’s need. The mother superior herself cared for him and his children for a month. It would have been hard to serve that man every day. He would have used “the ugliest words and harshest invective” against her and her Lord. But this woman of stature and accomplishment “was quiet, she did her job, looked after the wounds, brought the children to school, prepared lunch, cleaned the house.”

A few days after the man went back to work, a companion said “bad words” about two nuns they saw on the street. He punched his companion and then told him, “You can say whatever you want against the priests and God, but nothing against Our Lady and against the sisters!”

Why did he do that? Francis asks. “Simply because he had met the maternal face of the Church, he had seen Our Lady’s smile in the face of that superior, that patient nun who went to heal him despite his imprecations.”

She looked with so much hate

A lovely story of Christian witness. On the other hand, there’s the story Abby Johnson tells in a recent Facebook entry. The now leading pro-life voice worked for Planned Parenthood. On her way to a meeting, a prolife protester asked her if she had children. She said she had a daughter. The woman “looked at me with so much hate in her eyes and said, ‘Your daughter must be so embarrassed by you. You are such a terrible mother. I feel so bad for your daughter.’ I just looked at her and walked off without responding. I couldn’t believe someone who was ‘prolife’ had said something that ugly to me.”

Johnson forgave the woman, because she felt she had to. Still, she warns, even if they forgive you, “People will remember the ugly things you say to them.”

You don’t have to spend much time on the web to see good people saying ugly things to other people. Some combox and Facebook discussions, holy cow. You may see the reason in yourself: the desire to hit, to score, to win, and to feel righteous when you do so. You may know well the thrill of the hunt, the adrenalin rush, when you find a target you can take out. I know that feeling. I like to win, but to win I need people to beat. It really is addictive.

You may be one of those people who don’t feel like that, and good for you. But you may still want to hit. It’s a really sneaky temptation. You may be one of those people who can go happily arguing until you snap or until the other person pushes your buttons. You may feel charity toward nearly everyone except people in certain groups you think beyond the pale. Or you may be unable to turn the other cheek or forgive those who trespass against you.

Each of these may push you to say ugly things to or about other people, when otherwise you go through life like a junior St. Francis or St. Clare.

Read more:
Pope says God’s pardon is at the ready, but it comes with a difficult pre-req

She came to thank him

I’d rather not be that person who tries to take down people and I’d rather you weren’t either. I think of another helpful story Francis tells, in The Name of God Is Mercy. He shows how to speak to others we might want to judge, and there’s almost always someone we want to judge.

In his parish in Argentina was a mother with small children, whose husband had abandoned them. She could barely find work and most of the time had to prostitute herself to feed her children. The parish helped her, especially with food. One day she asked for the pastor, Fr. Bergoglio. He thought she wanted to thank him for the food they’d sent her. “Yes, yes, thank you for that, too,” she said. “But I came here today to thank you because you never stopped calling me Señora.”

Francis continues: “Experiences like this teach you how important it is to welcome people delicately and not wound their dignity. For her, the fact that the parish priest continued to call her Señora, even though he probably knew how she lived her life during the months when she could not work, was as important as — or perhaps even more important than — the concrete help that we gave her.”

Serve your enemies. Say Signora, “my lady.” Show Our Lady’s smile. You might make angry atheists defend nuns in the street.