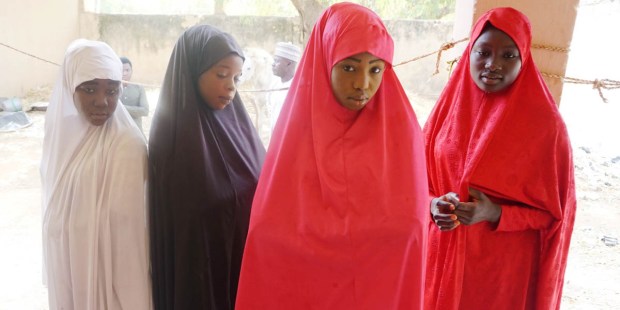 One girl is reportedly being held because she refuses to convert to Islam.

Between 76 and 104 school girls, depending on reports, have been freed by Boko Haram in Nigeria.

On Wednesday, the terrorist group returned the students, who were kidnapped February 19 from a girls’ technical school in Dapchi, in northeastern Nigeria.

Residents of Dapchi told the New York Times that when the militants dropped off the girls, they warned several residents that the girls should not be allowed to return to school.

Of the girls still being held by the militants, one reportedly is a Christian who has refused to convert to Islam, according to the BBC.

Nigerian President Muhammadu Buhari said on Twitter that the recent release of the Dapchi girls came as a result of “backchannel” negotiations and that no ransom was paid.

Information Minister Lai Mohammad told the BBC that the girls’ return was part of ongoing talks about an amnesty in return for a ceasefire. “We did not pay any ransom for the girls. We discussed with them the cessation of hostilities in return for possible amnesty,” he said.

“If [Boko Haram] returned and lay down their arms and renounce their membership of the insurgency, then we will give them free passage and they can return to society,” Mohammad said.

In spite of the good news that most of the girls were freed, the problem of kidnapping persists in the country.

“It is very sad to note that the spate of kidnapping in our country has risen to unimaginable proportion,” a statement from the Bishops Conference of Nigeria last month said. “Day after day, citizens are taken captive, humiliated and traumatized by heavily armed gangsters. No institution or individual is spared by kidnappers, no matter how old, sacred or highly placed.”

As a result, people live in constant fear and anxiety, the statement said.

“Kidnappers are ruthless, deadly and operate without any qualms of conscience. In their efforts to extort huge sums of money as ransom, they subject their victims to untold ordeals lasting weeks and even months.”

Many of the 276 school girls from the famous Chibok incident several years ago have been released, though more than 100 remain missing. Some were set free in exchange for suspected militants. There are also rumors of a large ransom paid, which critics fear could encourage more kidnappings.

“There is an urgent need to deal decisively with kidnappers and drastically curb their excesses,” the bishops conference said. “Given the effective security equipment available in the modern world of high technology, … our communities should be better policed by security agents, who are better equipped and well trained to handle the security challenge of kidnapping that is bringing our nation to its knees.”